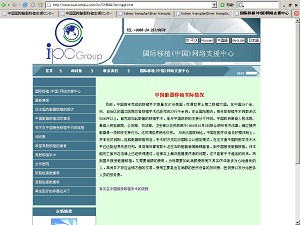 The Organ Transplant Support Center's website clearly states that the huge amount of organ transplants in China is made possible by the Chinese Communist Party. (Web photo)
China

Behind the Arrest of Japanese Organ Broker in China

On October 16, Chinese authorities announced that a Japanese man named Hiroyuki Nagase was arrested in China for illegal organ brokerage. According to Chinese Foreign Ministry spokesman Liu Jianchao, Nagase is an employee of IPC Information Service Co., a Japanese-funded enterprise in Shenyang City in northeastern China.

At a press conference, Liu said that Nagase's company “has been found to have released information on the Internet under the name of China International Organ Transplant Support Center and has helped to arrange organ transplants for Japanese patients since 2004.”

Some consider the arrest as proof of the Chinese authorities' determination to regulate the notorious organ trade black market in China. However, the website of the International Organ Transplant Support Center stated that the large amount of organ trade is made possible and continuously supported by no other than the Chinese Communist Party (CCP) itself.

The Center's website was again shut down. The same website has been shut down and re-opened since the discovery of the large-scale organ harvesting from live Falun Gong practitioners. Falun Gong is an ancient way of self-cultivation whose theory is based on the principles of “Truthfulness, Benevolence and Forbearance.” For the past eight years Falun Gong and its over 100 million followers have been brutally persecuted in China.

Nagase is the first person China has arrested with charges related to organ trading. The high publicity of the arrest has inspired speculation that the authorities' real aim is the bigger fishes behind the massive live organ harvesting.

Nagase's IPC Information Service Co. was registered in December 2003. Since then the International Organ Transplant Support Center had served as a major portal for bringing numerous foreigners to China for organ transplants. The website did not provide information on the sources of the organs.

According to a source from Japan, Nagase was arrested in mid September at Shanghai Airport. But the arrest was not announced until a month later during the CCP's 17th National Congress, one of the most sensitive periods for Chinese authorities. Considering China's customary lack of transparency and strict media censorship, as well as its careful avoidance and denial of organ trading, the noise it has made concerning Nagase's arrest is certainly unusual.

The Foreign Ministry spokesman Liu Jianchao said that Nagase's company “has not only been doing business beyond what it registered to do, but also violated the regulation of the Ministry of Health prohibiting organ trading in China.” Regarding these remarks, Dr. Wenyi Wang, a pathologist who has been studying and protesting the CCP's organ harvesting since its discovery, pointed out that the CCP is trying to pass the buck again. Dr. Wang argues that though the website is under the name of Nagase's company it had been fully supported by the CCP, and had been used as an official government website. “The reason why the CCP used Nagase to run it,” observed Dr. Wang, “is because they know organ harvesting is a sinister crime. Nagase's role is to be the scapegoat to be sacrificed when the crime is revealed, which is exactly what's happening now.”

Dr. Wang's accusation seems to be backed by the statements on the center's website which expressed gratitude for the strong support from Chinese government without which “the huge numbers of organ transplants can not have been achieved.” The website also mentioned relevant laws issued on October 9, 1984 in China which stated that the government supports the provision of human organs. As the website correctly concluded, China is the only country in the world that issues laws like this.

On its website, the Organ Transplant Support Center listed the typical waiting period for each major organ. According to the list, livers and kidneys can be provided within one to two weeks, with the longest waiting time of around one month; for hearts and lungs, the waiting period is about one month. Moreover, the website promised that if the organ found is not the right match for the patient, the center will find another one within a week.

Obtaining fresh organs in China is disturbingly easy and quick, especially when you consider that in all other parts of the world people have to wait many years for an organ transplant. Experts say that the only possible explanation is that a huge number of living people are used as convenient organ sources.

According to the Center's website, China had conducted 85,000 organ transplants by 2006, and in 2005 alone 12,000 were conducted. This number is many times higher than that of executed prisoners in China according to official statistics.