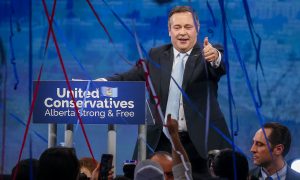 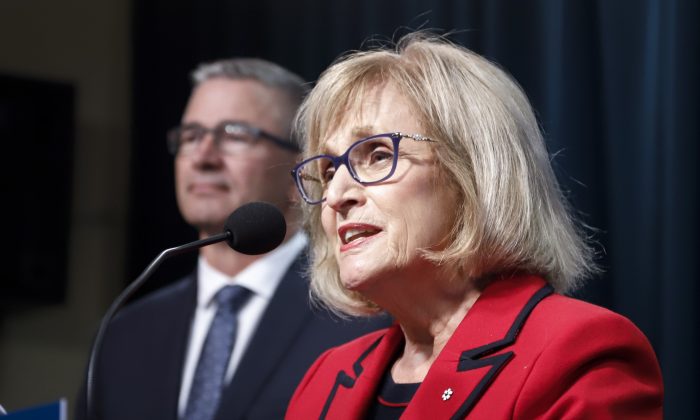 Janice MacKinnon, chair of the Blue Ribbon Panel on Alberta’s Finances, and Travis Toews, Alberta’s minister of finance, speak to the media about the panel's report on Sept. 3, 2019. (The Canadian Press/Jeff McIntosh)
Canada

There are three parts to Alberta Premier Jason Kenney’s strategy to bringing back the “Alberta Advantage,” according to Grant Hunter, the minister in charge of cutting red tape for the province.

“Lower marginal tax rates than other jurisdictions, sustainable government, and lower regulatory burdens,” Hunter listed in an interview with The Epoch Times.

“We’re always in competition with other provinces, states, and countries throughout the world for that foreign investment, and so we’re going to move back to that winning formula that we used to call the ‘Alberta Advantage.’”

Hunter’s own portfolio is the last part of the strategy, overseeing the new United Conservative government’s objective of cutting regulatory burden by a third.  His department also works on reducing interprovincial trade barriers, a priority of Kenney to remove roadblocks to the movement of goods across the country.

On the fiscal sustainability front, last week’s release of a report by the Blue Ribbon Panel, headed by former Saskatchewan finance minister Janice MacKinnon, seemed to serve as a precursor to what may be expected in the fall budget: spending cuts.

The panel, commissioned by Kenney in May to examine Alberta’s fiscal situation, said the province’s per capita spending is the highest in Canada, having gone up in the boom cycles of the oil industry, and not coming down when oil prices fell. To fulfill Kenney’s plan of balancing the budget by 2022/2023, the government needs to not only freeze spending but also to cut expenditures by $600 million a year and “substantially reduce” capital expenditures if taxes are not to be raised, the panel said.

Kenney has also passed legislation to reduce the corporate tax rate from 12 percent to 8 percent over the next four years. In addition, he has scrapped the previous NDP government’s carbon tax, joining a handful of other provincial conservative governments in legally challenging a federally imposed carbon tax in the absence of a provincial one.

Hunter’s department recently released its report on the first hundred days of its operation, outlining red tape reduction measures. They include pausing new regulations for condominiums from coming into effect, to undergo further review with an eye to reducing regulatory burdens; simplifying advertisement requirements for energy and gas retailers; and allowing digital proof of auto insurance—a measure that Ontario recently introduced as well.

“The [jurisdictions] that have done [regulatory burden reduction] right have seen anywhere between 0.8 percent to 2 percent increase in GDP, so there is a real value to doing this right,” Hunter said.

“Paperwork for a small brewer is two pages in B.C. In Alberta, the same paperwork is 35 pages, so there’s an example of even the amount of work you have to do in filling out forms,” Hunter said. “They say time is money, so if we can free up the time of our job creators and our innovators, we can first of all save them money, and they don’t have to keep on passing that cost on to Albertans.”

In his own southern Albertan riding of Cardston-Taber-Warner, which borders the United States, he said he is dismayed when companies relocate across the border because there is a lower regulatory burden there.

“We don’t need to lose those jobs.”

Besides asking each government department to look for red tape reduction opportunities, the province has launched a website where the public can provide input on reducing unnecessary regulatory burden, and it has also devised industry panels to inform the minister where efficiencies can be found.

“We still want to make sure that we protect our environment, the safety of Albertans, but there’s probably a better way of doing things, we just haven’t looked yet. And that’s what these guys are going to do—they’re going to provide us with very good intelligence,” Hunter said.

Marco Navarro-Génie, a senior fellow with the Frontier Centre for Public Policy, said it takes the right balance to ensure red tape reduction is effective so that the government is not spending more on hiring additional bureaucrats and not getting the right return. But if done properly, it’s an important factor for boosting the economy.

“For example, if you’re just starting up a business, time is more valuable. The longer it takes for you to get started [due to added regulatory processes and paperwork], the longer you pay rent, interest on loans, and other costs,” which may contribute to the failure of the business, he said.

Another factor to ensure the success of the program is making sure that safety and other important regulations don’t get sidestepped. He adds that the experience of B.C. and the United States—where the government has pledged to shelve two regulations for each new regulation—so far hasn’t shown this to be an issue.