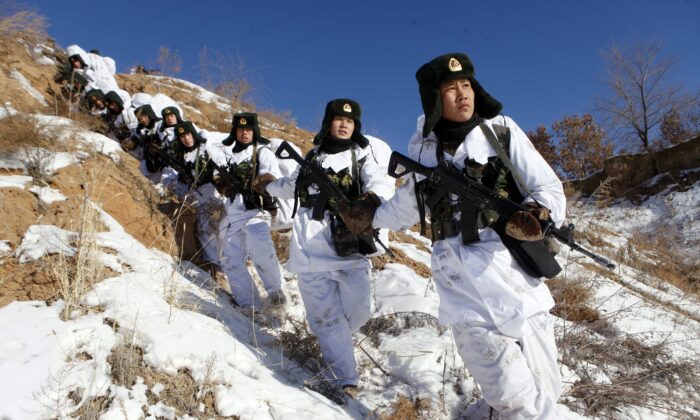 Information about Canada’s winter survival military training with China has been in the public sphere for some years but only drew heightened attention after recent media coverage.

A February 2018 tweet by the Canadian Army shows Canadian soldiers participating in winter training in China with the People’s Liberation Army (PLA), and Canada extending an invitation to China to take part in the same training in Petawawa, Ont., at a future date. Defence Minister Harjit Sajjan said during question period on Dec. 10 that the engagement was part of a cooperation initiative signed with China back in 2013.

But what caught the attention of Canada-China relations observers the most was internal government documents obtained by Rebel News under an access to information request showing Global Affairs’ push for the Department of National Defence (DND) to maintain military engagement with China. The documents, spanning late December 2018 to May 2019, showed Global Affairs giving this advice after Beijing had just arrested Canadian citizens in early December 2018 following Canada’s arrest of Huawei executive Meng Wanzhou.

The documents show that DND cancelled the trainings after pressure from the United States over security concerns.

The guidance in early 2019 from Global Affairs to continue military engagement stood in contrast with interpretations some made of another set of internal Global Affairs documents from late 2019 released by the parliamentary committee on Canada-China relations in February 2020.

Those documents included a briefing note by Global Affairs in October 2019 advising that a new approach to China is needed.

“While Canada has long framed its China policy through the lens of economic opportunity, it now needs to take account of Beijing’s long-term strategic challenge to Canada’s interests and values,” the department said in a transition briefing note for François-Philippe Champagne that month when he was just stepping into his new role as foreign affairs minister.

A Globe and Mail editorial said at the time the documents were released that the briefing note shows the “criticism of the Trudeau government’s approach to dealing with China is now shared by none other than the Trudeau government–or at least by the members of the civil service charged with advising it.”

David Mulroney, a former Canadian ambassador to China, called the briefing note “excellent advice” but also warned that change in the government’s China policy “won’t happen without high-level leadership, political courage, and a sense of direction.”

He also noted that the advice from the civil service is different from the approach taken by the Liberal government’s current ambassador to China, Dominic Barton, and his predecessor John McCallum.

“Right now, we’re likely to end up with a more sophisticated elaboration of the threadbare policy of ‘comprehensive engagement,’ with soothing talking points about hostage diplomacy, human rights, and interference,” he said on Twitter at the time.

“Hostage diplomacy” is a term some use to refer to China’s arrest of foreign citizens in an apparent attempt to apply pressure, such as China’s arrest of Canadians Michael Kovrig and Michael Spavor some 9 days after Canada arrested Huawei executive Meng Wanzhou on a U.S. extradition request in December 2018.

The recently obtained documents show Global Affairs’ then-top public servant Ian Shugart telling DND in February 2019 that “Canada does not want to be the partner [with China] that is reducing normal bilateral interactions.” Shugart was deputy minister of foreign affairs at that time and later appointed clerk of the Privy Council in April 2019.

These documents also show that Global Affairs had in February 2018 provided a foreign policy guidance document to DND and the Canadian Armed Forces encouraging them to “pursue bilateral cooperation with the PLA.”

“Civil servants in general are supposed to implement the political line that has been determined by the government at the time,” says Stephen Nagy, a Canadian scholar in international relations and a senior associate professor in politics at the International Christian University in Tokyo.

Nagy says the difference in advice shown in the two sets of documents from Global Affairs could be because of the department’s line of thinking of avoiding a “zero-sum approach to China.”

There is also a timing difference between the two sets of documents, with the newly obtained set spanning the period from December 2018 to May 2019, while the briefing note is from October 2019.

A former government official who now works in Asia says change in organizations like Global Affairs is always very slow.

“The personalities of those at the top also matter, of course,” the former official told The Epoch Times on condition of anonymity.

“From my personal interactions with GAC [Global Affairs Canada] over the years, I sense that younger career diplomats are more keen for a course correction regarding China and, say, engagement with Taiwan, while their superiors are more resistant to that.”

The younger diplomats in the department are likely reluctant to go against the wishes of their superiors, the former official notes, lest they compromise their careers.

Conservative leader Erin O’Toole places the responsibility directly with the Liberals. Last week in the House of Commons, he asked Deputy Prime Minister Chrystia Freeland, who was foreign affairs minister at the time the newly obtained documents were issued, why she was “trying to push the Canadian Armed Forces to train the Chinese military on our soil, when they are abusing our citizens, our rights, international law.”

Freeland’s response was that her government is concerned about China’s treatment of Uyghurs and human rights in Hong Kong, and takes the release of Kovrig and Spavor as “an absolute priority.”

But for many the surprise remains that Global Affairs pushed for keeping such levels of military engagements with the PLA given all that has transpired with the Chinese regime’s behaviour on the world stage in recent years.

“There is a sense that, why would you continue to engage in these kinds of issues when you can consider stopping Huawei from being used in Canada, and you have citizens that are victims of hostage diplomacy, and frankly a very assertive China in the region, but also in terms of its diplomacy vis-à-vis neighbouring and far-off countries like Canada,” says Nagy.

China has most recently been involved in violent confrontations with India at the Himalayan border leading to deaths. It has also in recent years been making territorial claims in the South China Sea with its military presence, leading to heightened tensions in the region.

Besides its hostility toward Canada due to Meng’s arrest, Beijing has also taken a hostile stance toward Australia. The rift started in 2017 when Australia began taking a series of measures against foreign influence, widely understood to be targeting Beijing. It escalated with Canberra’s criticism of the regime this year for its handling of the pandemic. Beijing has blocked Australian agricultural and wine imports and arrested Australian journalists.

In an emailed statement, Global Affairs said that Canada’s relationship with China “is complex and we are engaging with eyes wide open.”