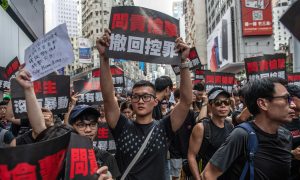 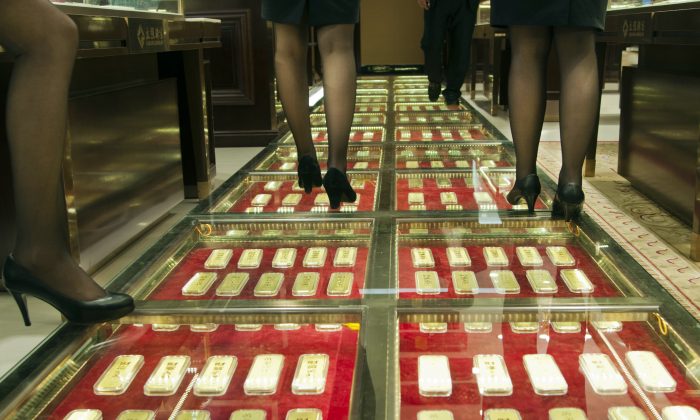 One thing is certain. China has been voraciously importing gold, using Hong Kong as a conduit. Imports set a record of 247 tons in March 2013 followed by a strong April. Since January 2012, China imported a total of 1,469 tons, according to an analysis by Zerohedge.

What is less certain is the how much China imports through other channels and how much gold it actually holds.

Chinese Communist Party officials said that the Chinese hunger for gold is exaggerated and point out that China’s “gold holdings are vastly underweight in comparison to those of most of the major Western nations,” a June 5 article on the Mineweb website reports.

Officially, China holds 1,162 tons of gold as reserves, only equal to 1.4 percent of its foreign exchange reserves, according to the World Gold Council.

The last time China released official figures for its gold reserves was in 2009. Given the large amount of imports, the hoard could be a multiple of that by now. For confirmation, however, the world needs to wait until China chooses to release the new data.

According to the 2009 figures, the Chinese state’s official gold reserves are significantly less than the gold reserves held by the United States (8,966 tons) and Germany (3,738 tons), the two countries that own the most gold.

China has been trying to add more gold reserves, partially to diversify its trillion dollar holding of U.S. Treasurys. In the long term, some analysts suggest that China might be having a go at replacing the U.S. dollar as the world’s reserve currency. If this is true, China would need a large gold backing to lend its currency credibility, which it doesn’t have at this moment.

According to official figures, the Chinese state is considered to be the world’s leading gold producer, as well as the world’s largest gold importer. On top of the gold coming into the country through Hong Kong—part of which goes to private buyers—it is rumored that the Chinese state imports gold through other channels, which can’t be monitored by the public.

The Chinese state’s gold mining data, provided by either official or semiofficial entities may not be accurate given that reporting in that country can be distorted. Numbers might be purposefully underreported and corruption by officials close to the country’s mining operations is not unheard of.

For example, the China Gold Association collects data from members only, although there are many illegal mining operations, as well as mines operated by the Chinese military. Also, gold is recovered as a byproduct from other metal mining operations.

“Western analysts are estimating that China’s total gold imports last year were around 490 tons—but no one talks about ‘illegal’ imports—that is gold smuggled into China,” the Mineweb article states.

One reason for the deliberate underreporting is that Chinese miners are supposed to sell all officially mined gold to China’s Central Bank. Some reports suggest the central bank keeps some of the gold off the market, which may be allocated to the official reserves in the future. This amount could be between 50 and 100 tons per year.

Since China only reports official gold holdings when it pleases, these hidden reserves could be used to stun the West and present a much higher than anticipated figure.