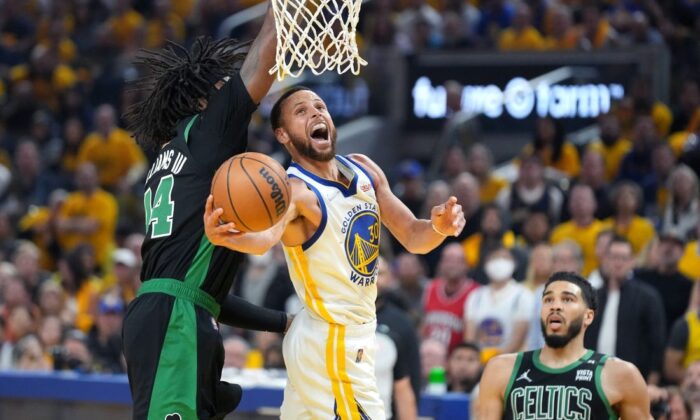 Andrew Wiggins couldn’t identify whether he was most impressed with his scoring, his rebounding or his shooting on Monday night.

It was a rare occasion when three things were equally brilliant.

Wiggins ignited a 10–0 burst at the start of the fourth quarter with a coast-to-coast layup as part of a team-high, 26-point effort, propelling the Golden State Warriors to a 104–94 victory over the Boston Celtics in Game 5 of the NBA Finals in San Francisco and a 3–2 lead in the best-of-seven series.

After winning for the 11th time in 12 games on their home floor in the postseason, the Warriors will have an opportunity to claim their fourth title in the eight-year Steve Kerr era when the clubs meet in Boston for Game 6 on Thursday.

“It’s an opportunity of a lifetime,” Wiggins said after putting his team on the doorstep of its seventh all-time championship. “It’s something I’ve worked hard for, something the team has worked hard for. So I’m excited. I can’t wait.”

Both teams survived long droughts from beyond the 3-point arc only to be separated by just one point through three periods. The Warriors then took command for good after Wiggins grabbed a defensive rebound, drove the length of the floor, and dropped in a layup 37 seconds into the fourth quarter.

Jordan Poole did most of the rest of the damage in the 10-point burst, contributing three free throws and a jumper, while Klay Thompson bombed in a 3-pointer, helping Golden State go up 85–74 with 9:05 to play.

The Celtics, coming off a Game 4 loss at home and not having dropped consecutive contests previously in the postseason, never got closer than seven after that.

“I feel like we’re almost playing right into their hands, doing the things they want us to do,” said Celtics veteran Al Horford, whose team missed its first five shots of the fourth period while mixing in two turnovers. “We’re taking contested mid-range shots, probably playing too fast at times … The offense isn’t clicking like we need it to be.”

Wiggins’ 26 points were one fewer than his playoff career high, set in a Game 3 win at Dallas in the Western Conference finals. He shot 12-for-23 on Monday and found time for a game-high 13 rebounds, completing his second consecutive double-double despite missing all six of his 3-point attempts.

Missed 3-pointers were the story of the night, as the Warriors took advantage of Boston misfiring on its first 12 attempts to build as much as a 16-point lead in the first half.

However, Golden State then went cold from deep, missing 14 in a row as the Celtics stormed into a five-point lead in the third period.

A buzzer-beating 3-pointer by Poole allowed the Warriors to reclaim a 75–74 lead entering the final 12 minutes, setting up the difference-making flurry.

“We did a really good job of protecting the basket,” Poole said after the Warriors forced the Celtics into 18 turnovers. “It allows us to press up, play with physicality, rotate. Playing team defense is huge.”

Golden State won despite Stephen Curry missing all nine of his 3-point attempts on a 16-point night. Curry had never previously gone without a 3-pointer in his 133-game playoff career.

Coming off a 43-point explosion at Boston in Game 4, Curry found time for a game-high eight assists. Thompson finished with 21 points, Gary Payton II had 15 and Poole added 14.

“We’re here and we’re hungry,” Wiggins said. “We want this. The team that wants it the most is going to get it, and we want it.”

Jayson Tatum paced the Celtics with a game-high 27 points, completing a double-double with a team-high 10 rebounds. He shot 5-for-9 from beyond the arc, but his teammates combined to go just 6-for-23.

Marcus Smart had 20 points, Jaylen Brown 18, and Robert Williams III 10 for the Celtics, who had won eight of their previous 11 road games in the postseason, including Game 1 at Golden State.

The Celtics now find themselves in the same position they were in the Eastern semifinals against the Milwaukee Bucks, where they needed two straight wins to rally from behind in the best-of-seven.

“It’s tough,” Horford said. “Our backs are against the wall. We have to see what we’re made of. The challenge starts Thursday.”