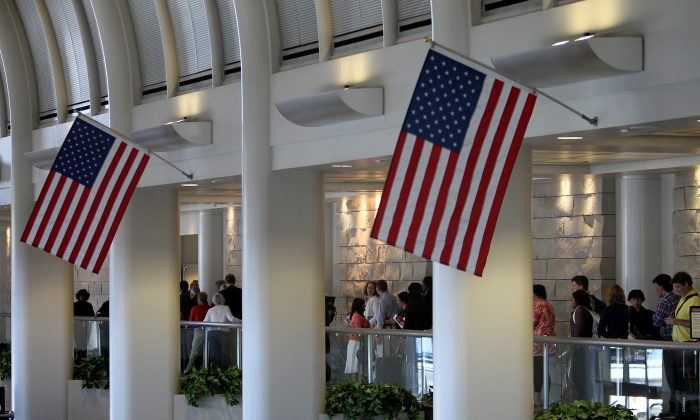 Passengers wait at security at Los Angles International Airport on April 22, in Los Angeles, California. Delays were reported throughout the nation because of the furloughing of air traffic controllers under sequestration. The average delay overnight in the Southern California Terminal Radius Approach Control (TRACON) was three hours. (David McNew/Getty Images)
US

WASHINGTON—There was a lot of finger-pointing last week at what’s behind the airline delays experienced by passengers across the country.

On one side were the members of Americans for Prosperity (AFP), a conservative economic policy organization, who protested at Reagan National Airport in Washington, D.C.

AFP protesters joined the ranks of citizens and lawmakers in blaming a recent spate of on-the-air traffic delays on the massive budget cuts known as sequestration.

“We’re here standing up for the passengers all around the country. There are signs in airports around the country that say that due to the sequester to expect longer wait times. Actually it’s the president’s problem, it’s the White House’s problem, and they need to be held accountable for it. It’s either a scare tactic from the White House, or it’s a complete mismanagement of funding,” said AFP-Virginia state director Dave Schwartz.

On the other side, Airline advocates have questioned the FAA’s choices in cutting the budget to meet the 10 percent cut required by Congress.

Airlines for America (A4A), the only industry trade organization that includes the principal airlines, claims the FAA could have allocated funds in a manner that would have met the requirements without furloughing air traffic controllers.

A4A filed a lawsuit against the FAA in the U.S. Court of Appeals for the District of Columbia Circuit last week in an effort to get the FAA to change its approach. The lawsuit seeks to halt the FAA’s Capacity Reduction Plan, according to an A4A statement.

The FAA reported in a statement on April 24 that travelers can expect to see a wide range of delays. The agency attributed 1,025 delays on April 23 to the furloughs required by the automatic budget cuts imposed by the sequester.

“We cut contracts, we eliminated temporary employees. We looked everywhere to avoid the types of furloughs that are now taking place,” said Secretary of Transportation Ray LaHood in an interview with CBS.

Although LaHood asserts that the FAA has acted in its power to prevent delays, a Bloomberg analysis of FAA staffing data claims that the FAA could have avoided delays by furloughing air traffic controllers at specific locations, rather than distributing staff reductions equally across the country.

“I think you can try to point blame at anybody. I think it’s a sad state of affairs that a country of our size and our abilities, that we are in a situation like this. I think that the president should sit down with the leaders of Congress to get this issue resolved, said Chuck Taylor, a federal employee before boarding his flight at Reagan Airport.

The National Air Traffic Controllers union would have to support a decision to implement furloughs at overstaffed airports, according to the Bloomberg report. And the union would also need to enter into a mutually agreed upon collective bargaining agreement with the FAA.

“If Congress wants to address specifically the problems caused by the sequester with the FAA, we would be open to looking at it, but it would be a Band-Aid measure and it would not deal with the many other effects of the sequester,” said White House Press Secretary Jay Carney in a White House press briefing.

Carney accused Republican lawmakers of embracing the sequester and touting it as a political victory.

“The best way to deal with the sequester is to eliminate it. But Congress has to act,” said Carney.

Under pressure from constituents, Congress recently approved a bipartisan bill that would allow the FAA to shift $253 million dollars from other operations to pay the air traffic controllers through September.

The president said that solving the across-the-board budget cuts required by the sequester on a case-by-case basis is not the right approach, but he is expected to sign the bill regardless.

After the decision, the FAA announced that it had suspended all employee furloughs and that the system would resume normal operations.