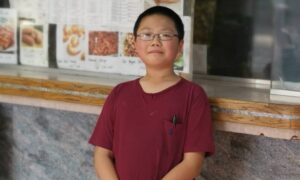 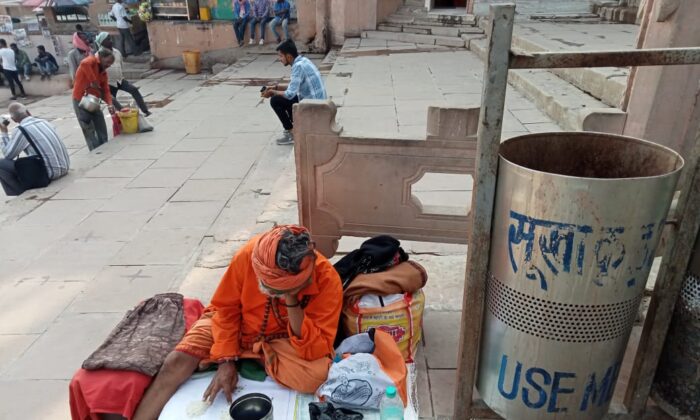 A monk sits on the bank of the river Ganges at the Dashashwamedh ghat seeking alms in Varanasi on Feb. 19, 2021. (Venus Upadhayaya/Epoch Times)
India

VARANASI, India—Every day, scores of beggars line the banks of the river Ganges in the city of Varanasi, where pilgrims pour in from across India to cremate their loved ones, perform the rituals of life and death, or visit the ancient temples in the world’s longest continuously inhabited city.

The city, which is part of the parliamentary constituency of Indian Prime Minister Narendra Modi, has been facing threats from militants. In 2018, the banned organization Lashkar-e-Taiba sent a letter threatening to blow up well-known religious sites in the city. A year before that, the city received similar threatening letters from the ISIS terrorist group.

The city’s beggars throng its crowded streets, without any identity verification, to collect hundreds of rupees in daily alms and a varied menu of sumptuous meals from nearby temples.

But the beggars pose a unique security threat, and an Indian charity is putting in place an employment project to help transform their lives.

“Unemployment is the biggest threat to internal security, as terrorist outfits use [unemployed people] more often,” Chandra Mishra, the convener of the Common Man Trust, told The Epoch Times.

The “Beggars Corporation,” a corporate-community project, is defined as “the prologue to the result-oriented National Employment Policy” by The Common Man Trust, a charity that believes the corporation can be an eye-opener for India’s manpower-based economy.

“An idle mind is a devil’s workshop, so the old saying goes,” Mishra said. “By productive employment of the so-called unemployable, a nation is not only reducing its burden of subsidy and freebies but also making them capable of contributing to the GDP, paying tax to the state, and taking care of their aspirations.”

India doesn’t have a national employment policy, and the country’s Ministry of Labour and Employment is trying to shape one by December, he said. He believes the Beggars Corporation can work to make the new employment policy time-bound and result-oriented.

The charity said in its proposal to the Indian Prime Minister’s Office: “Begging is less a compulsion, more a situation resulting from lack of self-confidence, scope, and guidance. Begging is the real Development Index of a nation that laughs at GDP growth. It sums up many key factors: attitude to work, availability of work, the capability to work, the concern of the society and welfare governance.” The proposal was also sent to the Federal Ministry of Social Justice and Empowerment, and to the NITI Ayog, a policy think tank of the government of India.

The Ministry of Social Justice and Empowerment in New Delhi confirmed to The Epoch Times that it had received the proposal.

The Beggars Corporation is a way of integrating solutions to multiple problems—transforming lives, working out employment models, building capacities and startups, raising investment, sustaining the economy, while also reducing threats to national security. The program is the way complex societies like India can leverage their resources to solve their problems, its designers say.

Mishra told The Epoch Times at the Dashashwamedh Ghat, where beggars convene and where evening prayers to the river occur, that the project is currently identifying beggars, to steer them toward mainstream opportunities and away from threats.

For identification, the beggars are convinced to register. So far, 14 families including 22 individuals have registered with the project, which is advocating for the government to pursue a policy on the matter.

“Here we are creating a brand out of beggars, a corporation of, by, and for the beggars and turning them into dignified businessmen, using the same system which made them beggars,” said Mishra, while he went door to door with colleagues from a local partner charity on Feb. 19 asking shop owners and pilgrims to sign their petition to make the Dashashwamedh ghat beggar-free.

While they walked around where beggars sat on the ground with their share of coins and food grains—some children dressed as popular gods and goddesses walked around seeking coins from pilgrims on their trays adorned with pictures of gods.

“They are the children of beggars,” said Mishra, who has also started a morning school—”School of Life”—for the children as a part of the beggars’ project.

“School of Life is an integrated system of normal education, confidence building, skill training, talent nurturing, and value education. A home-away-from-home, it is designed to transform the child beggars into socially confident and economically independent citizens who can be assets for the society,” he said.

The School of Life started on the Dashashwamedh ghat on March 1 with a few children, with the goal of growing into a regular school for 20 children in June. Mishra said that beggars who have spent their entire lives on the streets have no dreams for themselves but they have dreams for their children, which motivates them to work.

“Unless until we ensure that the children won’t go back to the streets, the tradition of begging will never end,” said Mishra. Begging has been a century-old problem in India, he said.

India had 413,670 beggars, with 65,835 of them in Uttar Pradesh state, where Varanasi is located, as of March 2018, according to government figures. The number of unidentified beggars poses a major threat to national security, which the Beggars Corporation seeks to solve.

The pilgrimage city of Varanasi had 12,000 beggars before the COVID-19 lockdown, when religious tourism was at its peak in the city, according to a survey by the Common Man Trust. That stands at 6,000 now, with 40 percent of them being capable adult beggars, whom the project is targeting.

Mishra told The Epoch Times that some beggars he’s followed own their own land and properties in surrounding villages and have children studying in schools and colleges. Yet they beg in Varanasi during the peak tourism months because it provides easy income.

Mishra has high hopes for his development model and he predicts it can be achieved in five years. “If beggars can be entrepreneurs, nobody can be unemployed,” he said.

He points to the example of Nobel laureate and Bangladeshi social entrepreneur Mohammad Yunus’s work with beggars. His Grameen Bank gave loans to more than 100,000 beggars to start their own businesses and nearly all the loans have been repaid in full.

Mishra encourages people to invest and not donate because India has the highest number of ordinary people donating money in the world, ahead of both China and the United States, according to the proposal submitted to the Indian Prime Minister’s office.

India’s philanthropic capital as of 2017 was more than $13 billion (92,576 crores), according to a study supported by the Bill and Melinda Gates Foundation and Rohini Nilekani Philanthropies.

“Charity breeds poverty; third-world countries are the proof of it. Investment can link the poor to the market, which is the only source of wealth creation,” Mishra said.

The project has zeroed on various locally made products of Varanasi, including street food, which is famous around India.

The project is already showing encouraging results: Shopkeepers on the narrow street leading to the Dashaswamedh Ghat have agreed to replace plastic bags with paper or cotton bags produced by the Beggars Corporation.

“We have requested the government to stop using tree-based paper in the offices in Varanasi and use handmade paper produced by recycling waste by the corporation,” Mishra said.