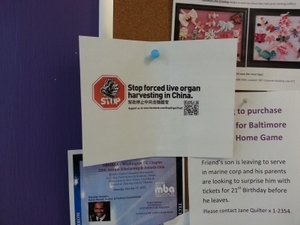 Before US Election, Pressure to Expose China Organ Harvest

Momentum is building before the presidential election on Nov. 6 to have a wider discussion about America’s China policy, particularly on a subject whose gravity appears to conflict with the orthodox view that the Chinese regime can be a reliable American partner.

Activists and a New York-based media organization have brought up the fact that tens of thousands of prisoners of conscience in China have been targeted for organ harvesting, much of the time while they were still alive. Chinese military hospitals operate the organized business of killing Falun Gong practitioners for their organs, a practice that began nearly a decade ago.

A video being promoted virally online, half a dozen letters delivered to President Obama and Republican candidate Mitt Romney, along with grassroots postering, all seek to draw attention to the matter.

Soon after a short documentary produced by New Tang Dynasty (NTD) Television was posted online, it was recirculated by Eamonn Fingleton, a former editor for Forbes and The Financial Times, and author of the book In the Jaws of the Dragon: America’s Fate in the Coming Era of Chinese Dominance.

In his article on Forbes’ website, he posted the video with the recommendation that it made for apropos viewing in the context on the presidential race, and questions over the United State’s policy toward communist China.

“If this clip does not focus American attention on the ethical implications of China’s rise, nothing will,” Fingleton wrote.

The Falun Dafa Information Center also drew attention to the NTD video, pointing out its significance in the context of the leadership changeover taking place in China.

“Despite the mounting evidence of these crimes, mainstream media have been largely silent on this issue, but as this video shows, credible voices from the medical and policymaking communities are raising the alarm that horrific things are happening in China that can no longer be ignored,” Levi Browde, the Executive Director of the Falun Dafa Information Center, was quoted saying.

He added that the abuses “tear at the very fabric of our humanity.” Browde and the Information Center did not directly draw a connection between the evidence of organ harvesting from prisoners of conscience and the U.S. presidential election, but Falun Gong practitioners in the United States have been doing just that, actively, over the last several weeks.

Falun Gong volunteers have collected signatures for petitions outside the buildings where debates are being held, and have hand-delivered letters, multiple times, to candidate Romney, President Obama, and their advisors and running mates, at public events across the country.

A Facebook page calling itself Stop Organ Theft features the gruesome image of a hand grasping a heart dripping with blood counterposed against a bright red stop sign. Images are available to download and post in public places. The images have been seen in universities in Washington DC and in other cities, as grassroots supporters take action to express their views in small ways.

The message may be getting through to those who make decisions on U.S. China policy, or who may one day make them. John Bolton, a foreign policy advisor to Mitt Romney, replied when asked about the matter at a private fundraiser recently that it is something that the U.S. should “take on” China about.