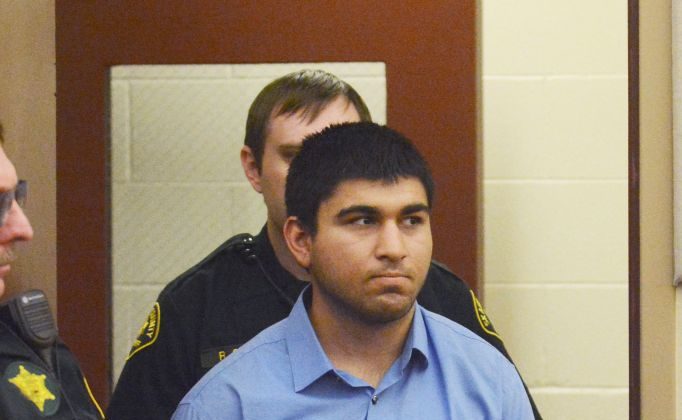 Arcan Cetin is escorted into Skagit County District Court by Skagit County's Sheriff's Deputies on Monday, Sept. 26, 2016. Cetin is being held under a magistrate's warrant which will give Skagit County prosecutors 30 days to file charges in relation to the Cascade Mall shooting that took place on Friday evening. Five people were killed in the shooting, and Cetin is being held on a $2 million bail. (Brandy Shreve/Skagit Valley Herald via AP)
US

SEATTLE—Assaults on his parents and inappropriate sexual behavior at school led judges to order mental health treatment for the young man charged with killing five people at a Washington state department store, but weekly counseling sessions failed to help him.

Court records obtained by The Associated Press detail a series of criminal charges and attempts to rehabilitate 20-year-old Arcan Cetin, who was diagnosed with post-traumatic stress disorder, attention deficit hyperactivity disorder, anxiety disorder and depression. They didn’t detail what caused the PTSD.

A court first ordered Cetin into treatment after he attacked his mother two years ago. He was following a program designed to erase that assault charge when he made unwelcome sexual advances toward two girls in his math class in 2015 and then punched his stepfather soon afterward, the documents say.

Jim Follman, an addiction counselor, wrote in January that there was “a strong likelihood of similar future violations” unless Cetin received treatment for his mental health and substance abuse disorders.

Cetin was involuntarily sent to a hospital for treatment two months earlier because professionals said he was likely to harm himself. He had attempted suicide and overdosed on his prescription drugs several times, records show.

But as recently as Sept. 6, he attended a counseling session and was found to be compliant with his court-ordered treatment.

Cetin’s parents, despite the attacks, helped him pay his rent and frequently visited — his stepfather had dinner with Cetin on Friday before police say he opened fire in the Macy’s cosmetics department at the Cascade Mall in Burlington, north of Seattle.

When officers arrested Cetin near his apartment Saturday night after a nearly 24-hour manhunt, they say he confessed to shooting the victims ranging from a 16-year-old girl to a woman in her 90s. He was charged with five counts of first-degree murder, but prosecutors said they still don’t know what motivated him.

Stepfather David Marshall told reporters as he and Cetin’s mother, Hatice, left a court hearing Monday that they had been working with their son on his “mental health issues” and were devastated by the shooting. They have declined further interviews.

Cetin was arrested on domestic violence charges in October 2014 after arguing with his mother because she wouldn’t let him take his car to see his girlfriend, who had recently moved away. He broke glass in two pieces of furniture, put a hole in a wall and made dents in the refrigerator, she told police.

When Marshall got home and said he couldn’t visit the girl, Cetin exploded again and took his mother’s hand and started smacking himself in the face, she said.

Marshall called 911, and when the dispatcher asked if there were any guns in the home, Marshall said they were under his bed. When Cetin heard the comment, he bolted for the room, with Marshall close behind.Cetin tried to reach the guns, but Marshall pinned him against a wall until officers arrived, the documents say.

He was charged with assault and malicious mischief. In February 2015, the court agreed to dismiss the charges after two years if Cetin complied with the conditions of his probation, including not possessing firearms, drugs or alcohol and attending monthly counseling sessions.

Four months later, two of his classmates at Oak Harbor High School told authorities that he placed his foot between their legs during class and wouldn’t stop. He denied being at school that day when questioned by police but was arrested on two counts of fourth-degree sexual motivation.

Later in June, Cetin had another violent outburst at home, and when his stepfather tried to stop him, he kissed Marshall on the lips. Marshall pushed Cetin away, and Cetin punched his stepfather in the face twice, records say.

He was charged with assault, which included an order not to contact Marshall. But the stepfather asked the court to end the order in December.

“Arcan needs all the support he can get,” Marshall wrote to the judge. “As his father, it is my responsibility to help him as much as possible. With this no-contact order I am unable to help.”

Cetin’s mother told a counselor in November that they rented an apartment for him, but he had not been taking care of himself. He wasn’t taking his medications and may have overdosed as early as September when his mother found an empty vial and she struggled to wake him up, the counselor said in a report.

“I don’t know how to help him,” Hatice Marshall told the counselor.

Cetin was committed to a hospital involuntarily. He told counselors his drugs of choice were alcohol and marijuana.

“He attributes his legal issues to cannabis use,” Follman wrote in January.