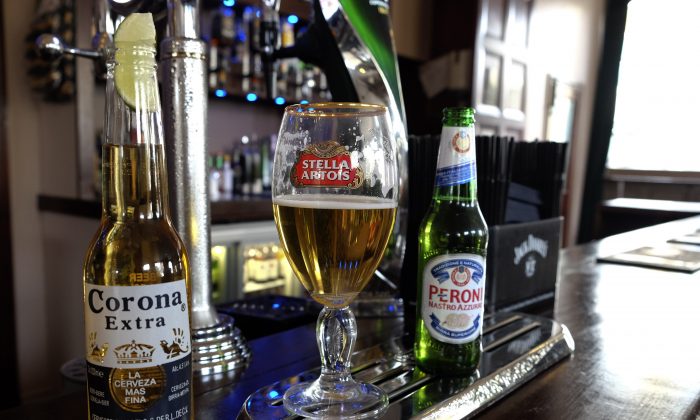 Drinks sit on the bar in a pub in London on Oct. 13, 2015. The world's two biggest beer makers will join forces to create a company that produces almost a third of the world's beer, as Budweiser maker AB InBev announced Wednesday, Nov. 11, 2015, a final agreement to buy SABMiller for 71 billion pounds ($107 billion). But in the U.S., the deal will not bring arch rivals Budweiser and Miller under the same roof. AB InBev's brands include Budweiser, Stella Artois and Corona, while SABMiller produces Peroni and Grolsch. (AP Photo/Kirsty Wigglesworth)
Business & Economy

Beer Merger Will Not Bring Budweiser, Miller Under Same Roof

LONDON—The world’s two biggest beer makers will join forces to create a company that produces almost a third of the world’s beer. But in the U.S., the deal will not bring arch rivals Budweiser and Miller under the same roof.

To ease concerns the brewing behemoth might get a stranglehold of the U.S. market, SABMiller will sell its 58 percent stake in a venture with fellow brewer Molson Coors for $12 billion. The deal includes rights to the Miller brand name and gives Molson Coors full control of operations.

The combined company—which as yet does not have a name—will also need to address regulatory issues in China, where SABMiller has a leading position with a 49 percent stake in the Chinese beer Snow. China is the focus of intense interest, as it already drinks a quarter of the world’s beer.

“This combination would create the first truly global brewer,” AB InBev Ceo Carlos Brito told reporters in a conference call after the deal, which is set to be completed next year.

AB InBev is seeking to bolster growth by acquiring SABMiller’s businesses in Africa and Asia as changing tastes and the growth of craft beers cut sales in developed markets.

“The transaction would strengthen AB InBev’s position in key emerging regions with strong growth prospects such as Asia, Central and South America, and Africa,” AB InBev said in a statement. “These regions have hugely attractive markets and will be critically important to the future success of the Combined Group.”

In some ways, though, the announcement marked only the end of the beginning. Though AB InBev got SABMiller’s main shareholders on board and lined up the largest-ever acquisition debt package, Erik Gordon of the Ross School of Business at the University of Michigan said the deal faces regulatory risks.

That’s particularly true in China, which is known to be tough in negotiations, and in South Africa, which has put the companies on notice that it will look at the deal’s impact on the overall economy.

“It’s easier for businesspeople to reach agreements with each other than to reach an agreement with regulators,” he said. “Regulators get no reward for reaching an agreement but get praised for being tough.”

The new company will be listed in Belgium, with secondary listings in Johannesburg, Mexico and New York.

AB InBev and SABMiller had twice extended the deadline for a formal offer after reaching an agreement in principle on Oct. 13. Shares in SABMiller rose 2.8 percent on Wednesday on relief that the deal was eventually formalized.

One of AB InBev’s prizes in creating a global beer company will be to gobble up SABMiller’s footprint in Africa. In a conference call with reporters, Brito made note of the potential for growth on the continent, where the middle class is growing.

SABMiller is the descendant of South African Breweries and has stretched its reach across the continent, betting that Africans will shift to higher quality beers as economic development increases income. It had operations in 17 countries on the continent, with another 21 covered by Castel Group, in which it has a stake.

That foresight made SABMiller an attractive takeover target.

To make the deal work, savings will need to be made. AB InBev expects to cut costs by $1.4 billion.

“AB InBev are second to none in being able to cut costs,” Cunnington said. “And they are utterly ruthless.”

But size alone won’t help the beer behemoths as they become bigger still. The Davids to their Goliath will remain the small and agile craft brewers and their customers who got bored with what the major companies had to offer. Jonny Forsyth, a global drinks analyst at Mintel, said the megabrewer will be forced to innovate, as it can’t just buy up all the craft brewers out there.

“If anything, there will be more of this craft style innovation as this megabrewer tries to replicate what the craft brewers have done,” he said.