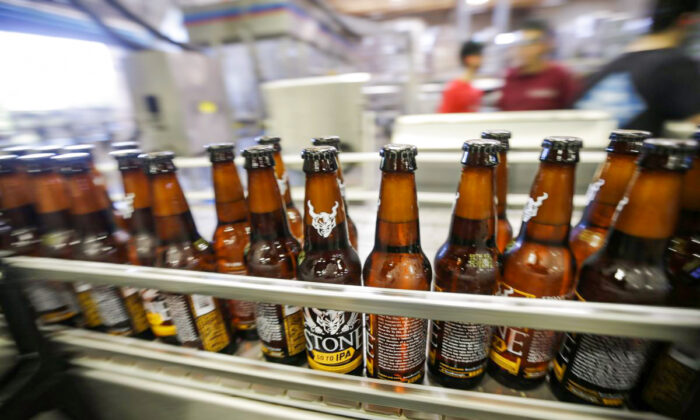 Brewers small and large in the United States expect the cost of beer to increase as the Ukraine conflict threatens global crop shortages and packaging remains in short supply.

In California, home to more craft breweries than any other state, some have also reported problems with transportation and trucking shortages.

“I think brewers have been hit kind of particularly hard,” Chuck Skypeck, the technical brewing projects director for Brewers Association, a community of craft brewers, told The Epoch Times.

The cost of making brew has jumped as the industry struggles to get aluminum cans, cardboard, barley/malt, and trucking and shipping services during the worldwide supply chain crisis.

Aluminum prices have gone up around 40 percent since last January, and barley now costs a dollar more for a bushel.

Continued strain on the industry is likely to lead to higher prices at the pub, industry experts say.

“This will put pressure on breweries who face a difficult choice: have their margins get eroded by price increases or raise prices, which risks seeing consumers look for alternatives,” Bart Watson, chief economist at the Brewers Association, told The Epoch Times in an email.

Brewers will need to decide whether to raise prices based on their brand strength and position in the market, he said.

“But I think it’s safe to say that we’ll likely see larger price increases in aggregate than we have in recent years,” Watson said.

Industry giant Heineken warned consumers in February that the company would raise its prices by “courageous” amounts this year.

Drought conditions in Idaho, Montana, and North Dakota last summer took a big bite out of domestic production, and the Ukraine conflict is expected to make world shortages worse.

American barley production was down 31 percent last year compared to the year before, according to the American Malting Barley Association.

About three-quarters of the barley grown in the United States is used for malt production. The rest is used for animal feed or human food.

This year, the United States is expected to import the most barley since the 2017 to 2018 season, as suppliers from Canada and the European Union make up the difference, the U.S. Department of Agriculture (USDA) reported last month.

However, the demand for barley has dropped since the pandemic started.

Even though the United States is forecast to use about 24 percent less barley this year than in 2020, the price of the grain is projected to be about 45 cents higher per bushel.

The conflict in Russia and Ukraine has disrupted the flow of grains from the region and caused great uncertainty in global grain trade, according to a report issued by the USDA.

Ukraine suspended port operations for commercial activities at the end of February, and ships operating there are faced with exceptionally high insurance premiums. Trade sanctions are also making transactions challenging, the USDA reported.

“In response, grain prices have soared for all major exporters,” according to the USDA.

Ukraine will export 17 percent of the world’s barley this year, making it the third-largest exporter. Russia was slated to export 13 percent. The two countries are responsible for nearly one-third of all exports.

Most of the Ukrainian barley has already been shipped, according to the USDA. But crop planning for this year’s season would need to start in the next few weeks, and the probability of that happening during the conflict is uncertain.

Even with a worldwide barley shortage, beer experts are looking forward to a good year as the country rebounds from the pandemic.