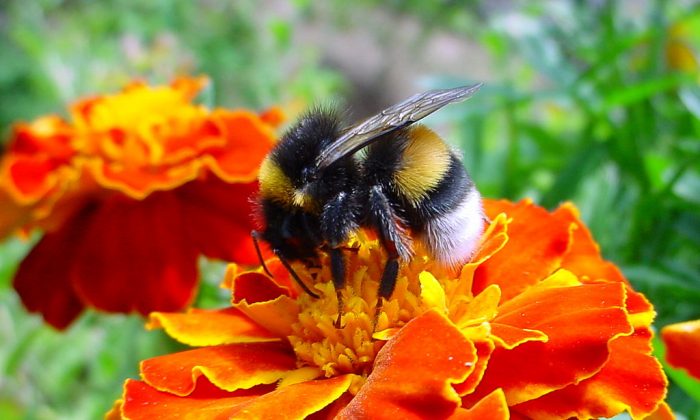 A bumblebee collects pollen from a marigold flower in this file photo. (Christian Bauer/Wikimedia Commons)
Science

Bee kill-off: The spraying of an insecticide killed 25,000 bees on June 24–but the number of bumblebees killed in the incident has now been upped to 50,000, says the Oregon Department of Agriculture.

The bees were killed by a landscape company spraying the insecticide dinotefuran, according to the Portland Tribune.

The Oregon Department of Agriculture confirmed the deaths were from the insecticide while raising the estimated number of bees killed to 50,000, according to the Oregonian.

Bees were dropping from 55 linden trees in a Target parking lot in Wilsonville, Oregon, reported the Tribune several days ago, citing Rich Hatfield, a conservation biologist with the Portland-based Xerces Society for Invertebrate Conservation.

“They were literally falling out of the trees,” said Hatfield. “To our knowledge this is one of the largest documented bumblebee deaths in the Western U.S. It was heartbreaking to watch.”

Hatfield’s estimate of bees killed was 25,000, but that number has now been doubled.

The insecticide was used to control the honeydew that the aphids produce, Dan Hilburn, the plants division director at the department of agriculture, told the Oregonian. But a Target representative said no customers complained about honeydew dripping on themselves or any cars, and the Xerces Society said that honeydew can be controlled without insecticides, such as using soapy water to spray them.

Dale Mitchell of the state Agriculture Department told the media outlet that the state is investigating any possible violation of pesticide laws; the investigation could take up to four months.

The trees were covered with netting on June 21 to try to prevent any more insect deaths.

“My worry is that we’re going to lose sight of the real message,” said Mace Vaughan of the Xerces Society. “I think we’re (using insecticides) all over the place, and people are doing it in their backyards without even knowing it.”

CORRECTION: An earlier version of this article contained a photo of honey bees. The Epoch Times regrets the error.