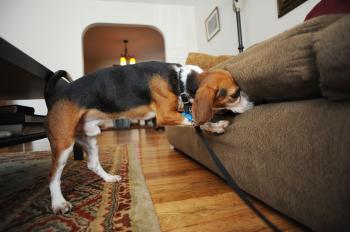 A beagle demonstrates how he sniffs out bedbugs in Queens, New York. The tiny blood suckers are currently enjoying a bonanza worldwide, particularly in the U.S. After infesting unprecedented numbers of apartments and offices, the pests branched out to raid clothing stores and, notoriously, a Victoria's Secret lingerie store on Manhattan's posh Upper East Side. (Stan Honda/AFP/Getty Images)
US

Omid Ghoreishi
Senior Reporter
Omid Ghoreishi is an Epoch Times reporter based in Toronto.
View profile
Follow
biggersmaller
Print
EDMONTON—They’re tiny little bloodsucking insects that come out at night to attack humans and other mammals, and they’re back in great numbers in Canada and around the world, a new survey shows.

Ninety-five percent of American respondents to the survey, conducted by U.S.-based National Pest Management Association (NPMA), indicated their company has had a bed bug infestation problem within the past year, a sharp increase compared to 25 percent reported in a survey prior to 2000.

“The results of the 2010 Comprehensive Global Bed Bug Study suggest that we are on the threshold of a bed bug pandemic, not just in the United States but around the world,” said Missy Henriksen, vice president of public affairs for NPMA.

The survey, which was conducted in association with the University of Kentucky, reiterates what pest management companies and city officials in North America and around the world have been reporting.

Cities across Canada are also facing their fair share of bed bug woes. As a result of increased calls regarding bed bugs, the City of Toronto set up the Toronto Bed Bug Project to deal with the issue. A 2008 survey by the Toronto Public Health showed that pest control companies all saw an increase in the number of inquiries related to bed bugs.

A list compiled by Insight Pharmaceuticals puts Toronto as the third top bed bug infested city in North America, citing the city’s use of bed bug sniffing dogs ahead of the recent G20 meeting and the presence of the pests in Etobicoke General Hospital.

The list ranks Vancouver as the eighth worst-infected city in the world, with new infestations appearing every day.

Topping the list are Columbus, Ohio, and New York.

In New York, many residential homes, hotels, and even clothing stores such as Victoria’s Secret have experienced infestations. The city last week announced $500,000 in funding to deal with the issue.

The insects, which look somewhat like an apple seed, are not known to carry blood-borne diseases but can cause minor swelling and skin irritation.