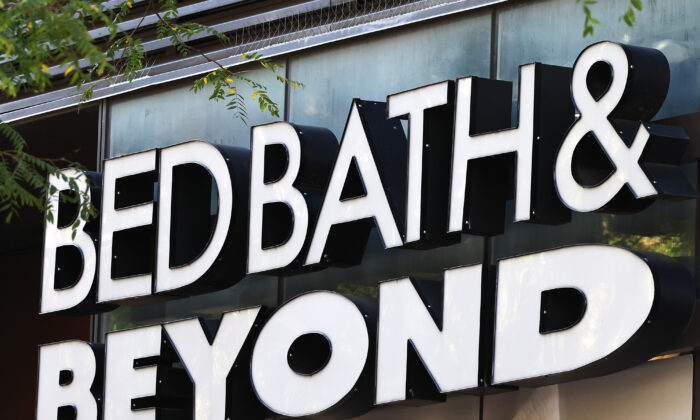 The Bed Bath & Beyond signage is seen in the Tribeca neighborhood in New York City on Oct. 1, 2021. (Michael M. Santiago/Getty Images)
Companies

Bed Bath & Beyond CFO Had Been Facing $1.2 Billion Stock Suit Before Suicide

The executive vice president and chief financial officer of Bed Bath & Beyond (BBBY), who died from an apparent suicide when he reportedly jumped from a New York skyscraper on Sept. 2, had been facing a $1.2 billion stock suit since late August over allegedly inflating the company’s share value.

The New York City medical examiner’s office said CFO Gustavo Arnal died from multiple blunt trauma and that he had taken his own life.

Prior to Arnal’s death, a group of shareholders that claimed a loss of around $1.2 billion had sued him and majority shareholder Ryan Cohen, a billionaire investor and chairman of GameStop, over accusations of artificially inflating the firm’s stock price in a “pump and dump” stock fraud scheme.

The class-action suit, filed in the U.S. District Court for the District of Columbia on Aug. 23—11 days prior to Arnal’s death—claims that Cohen approached Arnal about his plan to control shares of Bed Bath & Beyond, in a scheme from which they could both profit. Arnal allegedly sold his shares at a higher price after the scheme.

The filing alleged Cohen offered to purchase a large stake in the company, including call options on more than 1.6 million BBBY shares with a strike price between $60 and $80, while in exchange, Arnal would ensure that insiders wouldn’t flood the market with the stock.

As part of the plan, Arnal “agreed to regulate all insider sales by BBBY’s officers and directors to ensure that the market would not be inundated with a large number of BBBY shares at a given time,” the lawsuit reads. It also said Arnal issued “materially misleading” statements to investors regarding the company’s strategic plans, financial condition, and so on.

The two were listed as defendants. One plaintiff, Pengcheng Si of Falls Church, Virginia, said she and her spouse bought 8,020 shares of the company between March 25 and Aug. 18 “and have suffered realized and market losses of approximately $106,480.”

The company’s shares have been highly volatile in recent months, being viewed as a “meme” stock, which trade more on social media sentiment than economic fundamentals.

This year, BBBY stock climbed from $4.4o per share in early July to $30 per share on Aug. 17, around the time when Arnal sold more than 42,500 shares for more than $1 million, according to MarketBeat.com. Following the completion of the transaction, Arnal still held nearly 267,900 shares in the company, valued at more than $6 million.

The court papers also claim that Arnal and Cohen discussed an exit strategy with J.P. Morgan Securities LLC before they sold their shares. Although BBBY is said to have been in the early stages of evaluating the complaint, it believes “the claims are without merit,” Reuters reported.

A BBBY spokesman declined to comment on the lawsuit. The company said in a statement to The Epoch Times on Monday, “We will not comment on litigation and ask that you please respect Mr. Arnal’s family and their privacy at this time.”

Cohen didn’t respond to a request for comment by press time.

Arnal, 52, fell to death from his 18th-floor apartment in the 56 Leonard Street building, known as the “Jenga Tower,” in Manhattan’s Tribeca neighborhood, the New York City Police Department confirmed to news outlets.

BBBY confirmed Arnal’s death in a Sept. 4 statement, adding that the entire company was “profoundly saddened by this shocking loss.”

“Our focus is on supporting his family and his team, and our thoughts are with them during this sad and difficult time. Please join us in respecting the family’s privacy,” said Harriet Edelman, chair of BBBY’s board of directors.

Last week, the home-supply retail giant said it would close 150 stores, cut jobs, and overhauled its merchandising strategy in an attempt to turn around the money-losing business.

It forecast a bigger-than-expected 26 percent slump in second-quarter same-store sales, and said it would retain its Buy Buy Baby business, which it had put up for sale.

If you or someone you know is experiencing a crisis or is considering suicide, has mental health issues, or is engaging in substance abuse, dial or text the U.S. Suicide and Crisis Lifeline at 988 to speak with a counselor. If you’re in the United Kingdom, call the Samaritans at 116123.

The article has been updated with a response from a BBBY spokesman.