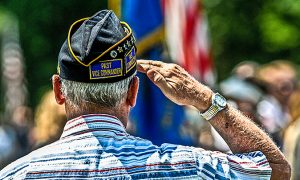 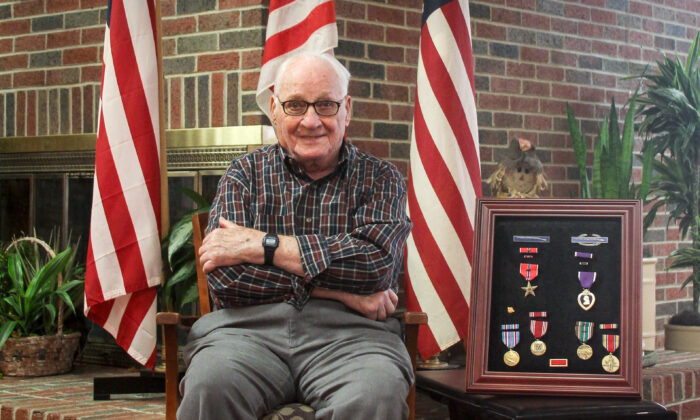 World War II veteran Bruno Stanga outside his home in Columbus, Ohio, on Nov. 3, 2019. (Courtesy of Neil Thompson)
US Features

Stepping back on American soil after the war ended was indescribable for Bruno Stanga: ‘No telling it really. You're just on air’
By Charlotte Cuthbertson

COLUMBUS, Ohio—At 97, Bruno Stanga has a life chock full of memories. But none stand out so clearly as those from the battlefield in Europe 75 years ago, during World War II.

“Some of these stories are vivid in my mind. You never forget,” he said on Nov. 1, with his wife, Kay, also 97, sitting next to him.

Stanga was inducted into the Army on Jan. 21, 1943, just a few months after turning 21. He was required to register for the draft under the Selective Training and Service Act of 1940.

The war had been raging in Europe since 1939, but the United States was only thrust into battle after the Japanese bombed Pearl Harbor on Dec. 7, 1941.

Stanga took a train to Fort Hayes, Ohio, and spent a couple of weeks getting rigorous health screening and aptitude tests.

“They really worked us over,” he said. “We took all kinds of batteries of tests. To see what we had done in the past, what schooling we had, if any, what we could do to help the army, where and how.”

He had spent six months in business school and was issued a military occupation specialty number related to secretarial work.

“So every place I went, even though I was in the infantry, I wasn’t going to be carrying any rifle—I was going to be hauling a typewriter,” he said. “Well, good and bad. You don’t get the excitement of battle, but you also don’t get shot at near as much.”

Stanga was bounced around military bases for different types of training and ended up in a special tank battalion, which would be attached to an infantry division, as needed.

By now, the military had a different type of problem. So many young men had signed up for service that the system was swamped. The U.S. military was made up of fewer than a half-million personnel in 1940, prior to Pearl Harbor. By 1942, that number had jumped to almost 4 million, and it reached 12.2 million by 1945.

With the staggering numbers, the military couldn’t use everyone at once and many were sent to universities to study in the meantime. Stanga spent the end of 1943 and the beginning of 1944 at Dayton University.

During the spring of 1944, Stanga was at Camp Swift, Texas, training for what would be the D-Day invasion in Normandy to wrest back German-occupied France. “We were waiting to ship overseas, to be in the first invasion,” he said.

But, as fate would have it, it was three months after the June 6, 1944, assault at Omaha Beach that Stanga ended up being deployed.

He recalls traveling in an armada of about 70 ships, surrounded by destroyers, that took about 10 days to reach France, zig-zagging all the way. He was part of the 102nd Infantry Division.

“We actually spent that first month and a half living in a French battlefield, dug into the whole campground. It was part of the Maginot Line,” Stanga said. The Maginot Line was an elaborate defense barrier of concrete forts and weapons stations constructed by France in the 1930s to deter a German invasion.

He was issued a pistol instead of a rifle, and had to carry half of the mortar, while the assistant gunner carried the other half. About eight others in the squad carried the mortar shells.

“You gotta be above ground when you fire that mortar. You can lay on the ground and fire a rifle, but not the mortar,” he said. “But you’re also 200 yards behind the actual lines.”

“There was a major battle around Thanksgiving ’44 and I should describe that one. It was a bad one,” Stanga said.

His company of about 400 men were advancing on enemy lines across an open, flat field, flanked by more battalions.

“We walked 15, 20 yards apart—the whole thing moved forward,” he said. “And of course, on the other side, is the Germans, who are stacked behind the different fortifications they had—firing at us as we were coming. And we’re walking across the field, which must be three or four miles wide; they could see us coming and we could see where they’re shooting from. We had to walk forward or crawl forward, whichever happens. When they started firing in your area, you laid down and crawled. So, we sometimes crawled for four or five hours at a time.

“And, of course, toward evening, you dug a hole, crept into it. So they had fire, mortar guns, mortars shooting at you, artillery, you’re in the ground pretty much. You dig a hole as far as you can get down.”

Stanga said they’d often find a shell hole that was about a foot and a half deep. “[We] dug two or three feet further down and crawled down into it.”

Stanga’s voice broke up when asked to describe what that was like.

“We lost about 25 percent of our company going through that field. It was two days. By the third day, our Air Force got the right signals and they bombed the tank and got it out of there. Once the tank was gone, then we were much better off.”

Stanga said that was the only major battle he was in, “other battles were skirmishes.” After the losses during this battle, the company was put on reserve and missed the Siege of Bastogne in Belgium during late December 1944, which briefly saw American forces surrounded by the German army. Bastogne was part of the larger Battle of the Bulge effort in Belgium, France, and Luxembourg.

The second battle that Stanga recalls vividly is where he earned both his Purple Heart and Bronze Star medals.

It was February 1945 in western Germany, not far from the city of Aachen, bordering Belgium. “In fact, it was one of the first cities that was almost decimated by artillery shells going into it. All our people around us were firing artillery,” he said.

His division was faced with a river crossing. “We were dug in on one side of the river, and we were going to cross this river at about 3 o’clock one morning,” he said.

“We went across in rowboats—10 or 15 men per rowboat with all his gear. And it took time to load it and unload it. In the meantime, the Germans knew where the river was. They knew what we were doing, and they could see us. They’d shoot flares so they could see us. They had their mortar zeroed in, and that’s where I was wounded—in that boat crossing that river.”

He was hit in the thigh with shrapnel, but jumped out and made it to the brush piles on the side of the river to wait for help.

“The rest of the guys went further ahead, shooting at the Germans.”

Getting wounded meant receiving a Purple Heart medal, but Stanga plays it down. “It was a minor shrapnel wound—I was only off the lines for two or three days.”

Stanga brushed off several queries about the Bronze Star, saying, “I didn’t do anything especially heroic.”

From there, things slowed down for Stanga as he made his way to Magdeburg, about 100 miles west of Berlin.

“I never got into Berlin. We stopped when the Russians took over the city. There was no sense of us going any further,” he said.

It was there that he saw the end of the war in Europe—on May 8, 1945, with the signing of unconditional surrender the previous day.

“As soon as the war is over, you’re just happy there’s no more hiding and people shooting at you. By then, most of the Germans took off when the army came and left the houses … so we all had homes to get into and sleep. It was pretty decent living. It wasn’t digging holes anymore.”

He was then transferred to Czechoslovakia to wait, with the possibility of having to invade Japan on the horizon.

It was in Czechoslovakia, after the fighting, that Stanga saw some of the most searing scenes.

“We saw a lot of the remains of the burning grounds. I remember several times going through those areas where they had a camp or they burned people. Burning hundreds at a time in the ovens,” he said.

“I seen ditches where they would shove the remains in the ditches and cover them with dirt. Some of the ditches weren’t covered yet. … They were still killing Jews at that time. They didn’t quit doing that—right to the very end, they were killing Jews. Even though they were losing the war and knew it, they just kept killing the Jews.”

Stanga said he was relieved when the United States dropped the atomic bombs on Hiroshima and Nagasaki, on Aug. 6 and 9, 1945, respectively.

“We knew that we were going to be shipped on to Japan. They promised us we’d have three days at home before we had to leave for Japan,” he said. “Fighting Japan was going to be worse than fighting the Germans. The Germans, when they realized you’re beating them, they’d give up. Not the Japanese. They would have fought to the very end.”

But Japan unconditionally surrendered on Sept. 2, 1945, and Stanga waited to return home.

With 3 million American military personnel to ship back stateside, a points system was enacted to discern priority—five points per medal, two points for each month served abroad, 12 points for children back home, and so on.

It took Stanga until December to get on a ship home from Marseille, France, to New York. The journey took about a week on a wild, winter ocean.

Stanga paused when asked to describe what it was like to reach American soil again.

“No telling it really. You’re just on air,” he said, the emotion evident. “Plus the fact that you know that in three or four days, you’re going to be back home. We landed on the 26th or 27th of December, and [by] New Year’s Eve, I was home.”

He said that when he looks back on the part he played in the war, it seems small.

“It was so little really compared to what it could have been.”

Stanga married at 30 after studying optometry in college. He looks over to his wife: “I like to tell her I was her last choice. She was getting close to the hill. When you’re 30, you’re over the hill. I’m 11 days older than she is.”

The couple has three children, five grandchildren, and two great-grandchildren. He practiced optometry in Salem, Ohio, for 60 years, retiring at the age of 81.

After fighting tyranny all those decades ago, Stanga is unimpressed with the push for socialism in the United States today.

“Half the Democratic power comes from the socialists in their group. In fact, these four or five young new representatives are going crazy with offering more socialism. They say no one has to buy anything any more—college is all free, everything is free,” he said.

But he’s hopeful that people will “come to their senses.”

“I don’t think we’ll ever be a socialist country. It’s too nice to be able to do your own thing and have what you want to have and earn what you have to have.”