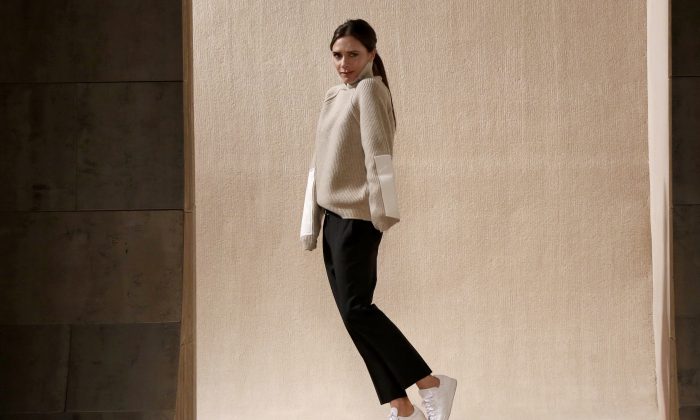 NEW YORK— Here are some recent highlights from New York Fashion Week, from the runway designs to the celebrity-filled front rows:

Beckham wants us to know this: Her personal style is always changing yet remains constant in key ways.

There’s a feminine strength with what she calls “boyish undertones” in the collection of layers that included soft boned bustiers reminiscent of her very first corset dresses, knits and prints of strong greens and earthy reds and oranges. While not everybody will run for the balloon volume she put in some skirts, her coats were solidly wearable—and sellable. Some appeared layered but were not, with knit sleeves sewn on for effect.

“Everything’s quite light. We need to take into consideration the different territories where we’re selling clothes,” she said of her fall/winter looks that did not scream frigid temperatures like those that greeted her guests Sunday morning in Manhattan’s cavernous business district downtown.

There’s no fear here of leaving seasonal boundaries behind. She put out bare shoulders in the dead of winter, along with cozy knit leggings, most worn with pointed flats and chunky rocker boots.

Coats are great, Beckham said, and she put out a few, but “It’s nice to show what’s going on underneath. … I just wanted to look at what I’ve worn and what I love and just rework those pieces to make them feel new and fresh and just show how my personal style has evolved.”

Among her more unusual touches were loose threads of wax cording that fluttered down the runway.

Ken Downing, a trend watcher for Neiman Marcus stores, had a smile on his face after the show.

“I love the unpretentious, relaxed elegance of the collection and being able to touch on all the important ideas for fall,” he said. “Menswear, flats, but done in a feminine way, and that sexiness of a bustier that really becomes a pivotal item, done in satin and layered under a little dress, or becomes a knit that layers over another knit but grounded with a great boot or pointed toe. The shoes were fantastic.”

In terms of commerce, Downing said, Beckham has it right.

“It feels like fall but you can wear those clothes any time, and that’s actually where the customers’ mindset is right now,” he said. “It’s the idea that you can buy it now, wear it now, and it did not feel overtly winter. It’s just chic clothes.”

As usual, Beckham’s hubby David Beckham and the kids were sitting front row.

When the Banana Republic design team looked for inspiration for their fall collection, they turned to one place: France.

“We really were cultural tourists and took tons of photographs,” Michael Anderson, senior vice president of design said. “We went to these old vintage places. We went to these old mills and these old print houses. We took a wealth of knowledge back to the studio with us.”

That wealth of knowledge translated into classic pieces for men and women filled with pops of color including orange, red, maroon and blue. Those brightly colored pieces are meant to be layered with neutral palettes which are a Banana staple.

“We were looking at how French men and women dress,” Anderson explained. “There is a certain style they have: casual and tailored, high and low. Ultimately it’s just beautifully feminine. We wanted to celebrate that beautiful feminine look.”

The budget-friendly looks were styled in a way that seemed effortlessly chic, which is exactly what the brand intended.

“The sweet spot is to have a beautiful versatile product that you can wear day in and day out,” Anderson said.