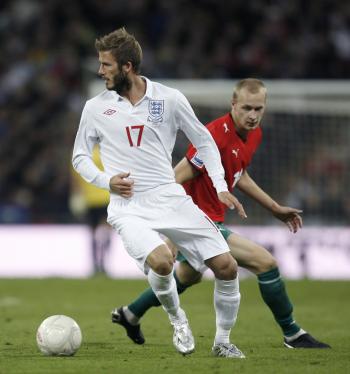 STILL GOT IT: David Beckham was named Man-of-the-Match against Belarus on Wednesday. (IAN KINGTON/AFP/Getty Images)
Soccer

England, without star players Wayne Rooney and Steven Gerrard, beat Belarus 3–0 at Wembley on Wednesday evening with help from a strong performance by David Beckham.

England manager Fabio Capello was taking the opportunity to experiment in England’s final World Cup qualifier against Belarus. His team had sealed their automatic qualification place for next summer’s World Cup in South Africa by winning their opening eight games in Group 6.

England was hoping to bounce back after losing their perfect record when they were defeated 1–0 in Ukraine last Saturday.

Rooney’s absence due to injury forced Capello to start with Aston Villa striker Gabriel Agbonlahor up front alongside Peter Crouch.

The Italian’s experiment started with an explosion when Crouch scored after only four minutes. Unfortunately that was where the fireworks ended for the first half.

The English team had nothing to prove and was one goal up after four minutes against a Belarus team who had no possibility of progressing to the playoff stages. So needless to say, there was very little chasing down the opposition from Belarus, but England probably gave Belarus a bit too much of the ball.

Enter Beckham
The second half opened with more fluidity. David Beckham made his 115th appearance for his country when he replaced Aaron Lennon after 58 minutes.

The crowd was pleased with David Beckham’s introduction as they cheered his arrival. The substitution by Capello appeared to be the catalyst that England needed. Beckham’s first touch, a crafty short corner to Shaun Wright-Philips gave England their second goal. A minute after his entry onto the field, Becks proved he still has his golden touch.

Crouch scored his second goal after 76 minutes, when Frank Lampard chipped to Carlton Cole who was in behind the Belarus defensive line. The West Ham striker’s shot was saved, but only deflected into the path of Crouch, who was charging in to the six yard box.

Crouch’s two goals were not enough to secure him a Man-of-the-Match performance, which went to David Beckham. In a post-match interview with Sky Sports, David Beckham said he was surprised that he was named man of the match.

The L.A. Galaxy star is expected to return to Italy to play for AC Milan next year, in a bid to ensure his place in the England squad. Capello has insisted that all members of his squad must be playing regularly for their respective club’s first team.


When asked about whether or not he would be playing with AC Milan next season he said “It’s close. I have always wanted to go back there, it’s 95 percent done.”

The draw for the playoff spots will take place on Monday. France, Russia, Greece, and Portugal will be seeded for the draw. The unseeded teams are Republic of Ireland, Ukraine, Bosnia-Herzegovina, and Slovenia. The playoffs will take place over two legs, home and away.