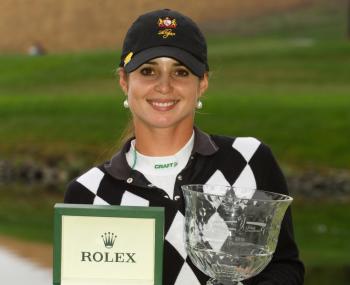 Beatriz Recari of Spain poses with the champion's trophy and the Rolex first-time winner's award following her victory at the CVS/Pharmacy LPGA Challenge at Blackhawk Country Club on October 17, 2010 in Danville, California. (Darren Carroll/Getty Images)
Golf

"I'm thrilled," Recari told AFP. "I'm very proud of how I handled myself out there. I did not allow the nerves or [look] any further than what I had to do right in front of me."

Gwladys Nocera of France shot just one behind Recari and finished in second place.

After the win, she jumped 98 spots in the world rankings to 74th place.

Recari was born and raise in Pamplona, Spain, the city that hosts the running of the bulls every year and learned the game from her dad Jose Luis.