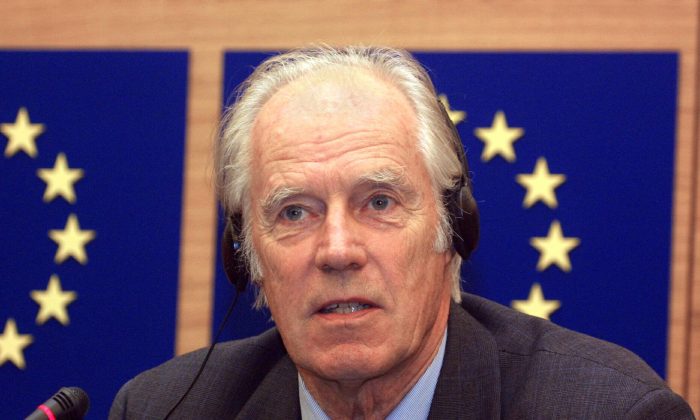 LONDON—George Martin, the Beatles’ urbane producer who quietly guided the band’s swift, historic transformation from rowdy club act to musical and cultural revolutionaries, has died, his management said Wednesday. He was 90.

“We can confirm that Sir George Martin passed away peacefully at home yesterday evening,” Adam Sharp, a founder of CA Management, said in an email.

Sharp called Martin “one of music’s most creative talents and a gentleman to the end.”

“In a career that spanned seven decades he was an inspiration to many and is recognized globally as one of music’s most creative talents,” Sharp said.

[He] was a giant of music—working with the Fab Four to create the world’s most enduring pop music.
— British Prime Minister David Cameron

British Prime Minister David Cameron tweeted that Martin “was a giant of music—working with the Fab Four to create the world’s most enduring pop music.”

Too modest to call himself the “Fifth Beatle,” a title many felt he deserved, the tall, elegant Londoner produced some of the most popular and influential albums of modern times—”Sgt. Pepper’s Lonely Hearts Club Band,” ”Revolver,” ”Rubber Soul,” ”Abbey Road”—elevating rock LPs from ways to cash in on hit singles to art forms, “concepts.” He won six Grammys and was inducted into the Rock and Roll Hall of Fame, in 1999. Three years earlier, he was knighted by Queen Elizabeth II.

Martin both witnessed and enabled the extraordinary metamorphosis of the Beatles and of the 1960s. From a raw first album in 1962 that took just a day to make, to the months-long production of “Sgt. Pepper,” the Beatles advanced rapidly as songwriters and sonic explorers. They not only composed dozens of classics, from “She Loves You” to “Hey Jude,” but turned the studio into a wonderland of tape loops, multi-tracking, unpredictable tempos, unfathomable segues and kaleidoscopic montages. Never again would rock music be defined by two-minute love songs or guitar-bass-drums arrangements. Lyrically and musically, anything became possible.

“Once we got beyond the bubblegum stage, the early recordings, and they wanted to do something more adventurous, they were saying, ‘What can you give us?'” Martin told The Associated Press in 2002. “And I said, ‘I can give you anything you like.'”

Besides the Beatles, Martin worked with Jeff Beck, Elton John, Celine Dion and on several solo albums by Paul McCartney. In the 1960s, Martin produced hits by Cilla Black, Gerry and the Pacemakers, and Billy J. Kramer and the Dakotas and for 37 straight weeks in 1963 a Martin recording topped the British charts.

Martin started producing records for EMI’s Parlophone label in 1950, working on comedy recordings with Peter Sellers, Spike Milligan and others, Sharp said. He had his first No. 1 hit in 1961 with The Temperance Seven.

But his legacy was defined by the Beatles, for the contributions he made, and for those he didn’t.

When he took on the Liverpool group, Martin was very much in charge, choosing “Love Me Do” as their first single and initially confining the newly hired Ringo Starr to tambourine—a slight the drummer never quite got over. But during a time when the young were displacing the old, Martin too would be upstaged.

His bearing was infinitely more patrician than that of the Fab Four, but, he grew up working class.

Before the Beatles, producers such as Phil Spector and Berry Gordy controlled the recording process, choosing the arrangements and musicians; picking, and sometimes writing, the songs or claiming credit for them. The Beatles, led by the songwriting team of McCartney and John Lennon, became their own bosses, relying on Martin not for his vision, but for what he could do for theirs.

They were among the first rock groups to compose their own material and, inspired by native genius, a world’s tour of musical influences and all the latest stimulants, they demanded new sounds.

Martin was endlessly called on to perform the impossible, and often succeeded, splicing recordings at different speeds for “Strawberry Fields Forever” or, for “Being for the Benefit of Mr. Kite,” simulating a calliope with keyboards, harmonica and a harmonium that the producer himself played with such intensity he passed out on the floor. Martin would have several good turns on the keyboards, performing a lively music hall solo on McCartney’s “Lovely Rita” and a speeded-up Baroque reverie on Lennon’s “In My Life.”

His bearing was infinitely more patrician than that of the Fab Four, but, he grew up working class. Born in north London in 1926, Martin was a carpenter’s son raised in a three-room flat without a kitchen, bathroom or electricity.

He was a gifted musician who mastered Chopin by ear, a born experimenter enchanted whenever he discovered a new chord. In demand as a producer long before he met the Beatles, he was a graduate of the Guildhall School of Music, studying composition and orchestration and performance on the oboe and piano.

“Music was pretty well my whole life,” Martin wrote in his memoir, “All You Need is Ears,” published in 1980. Hired by Parlophone in 1950, he worked with primitive technology, recording on wax cylinders with machines which driven by weights, not electricity. In 1955, aged 29, Martin became head of Parlophone. He worked with Judy Garland, jazz stars Stan Getz, Cleo Laine and John Dankworth.

By the early 1960s, Parlophone was fading and Martin was anxious to break into the pop market when a Liverpool shopkeeper and music manager, Brian Epstein, insisted that he listen to a local quartet. The Beatles already had been turned down by Decca Records and told that “guitar groups are on the way out.” Martin also was unimpressed by their music, but, to his eternal fortune, was pushed into signing them by EMI executive L.G. Wood.

Martin saw the Beatles as “very attractive people.” He was more than a decade older than any of the band members and, like an indulgent parent, tolerated and often enjoyed their sassy humor. On the first day in the studio, Martin lectured the Beatles on their weaknesses, then asked if there was anything they didn’t like.

“I don’t like your tie,” George Harrison reportedly quipped.

Gentlemen, you have just made your first number one record.
— George Martin

The backtalk was also professional. After the Beatles had a modest hit with “Love Me Do,” Martin recommended they follow with a light pop track, “How Do You Do It.” To Martin’s surprise, the band insisted on Lennon-McCartney’s “Please, Please Me,” originally written as a slow, Roy Orbison-styled lament.

Martin backed down, with one condition—that they speed it up. The result was a rush of energy and power, their first smash and the beginning of a phenomenon soon dubbed Beatlemania.

After “Please, Please Me” had been recorded, Martin told the band: “Gentlemen, you have just made your first number one record.”

The Beatles seemed to reinvent themselves from album to album, and sometimes from song to song. The single “I Feel Fine” was among the first records to include guitar feedback, while Harrison’s sitar on Lennon’s “Norwegian Wood” introduced millions of listeners to Eastern sounds. Their lyrics, especially Lennon’s, became more personal and sophisticated, and sometimes surreal.

The Beatles, none of whom could read music, depended on Martin’s classical background. They might hum a melody to the producer, who would translate it into a written score, as he did for a trumpet solo on McCartney’s “Penny Lane.” For McCartney’s “Yesterday,” Martin persuaded the composer that a string quartet would serve the song’s tender remorse.

Martin initially didn’t share in the band’s vast wealth, drawing a staff salary from EMI. But in 1965, he left to help form an independent company, Associated Independent Recordings. The Beatles agreed to keep working with him, on a freelance basis, leading Martin to boast that “I suppose I am now earning more than the managing director of EMI records.”

He was otherwise unaffected by the madness, keeping his lifestyle clean and his attire businesslike. His naivety led to some comical moments in the studio, like the night that Lennon, high on LSD, complained of feeling ill. An unsuspecting Martin ordered Lennon brought up to the roof, a dangerous place for an acid-head.

The Beatles began to break apart after “Sgt. Pepper,” released in 1967, and Martin’s contributions would also peak. Responding to the Band and other American groups, the Beatles turned against their own studio tricks and preached a more basic sound. Their double “White” album was far more spare, and individual Beatles essentially served as producers for their own songs.

The album’s length was also a rebuke against Martin; he had urged them to put out a single record, saying there wasn’t enough good material for two. For “Let It Be,” a self-conscious effort to reclaim their early magic, they rejected Martin altogether, turning over the tapes to Spector.

After “Let It Be,” an unhappy process for all involved, Martin assumed he was done with the Beatles, but they asked him back for “Abbey Road.” Released in the fall of 1969, it was their final, slickest record, capped by an extended suite of song fragments. The band officially split the following year.

Artistically, Martin would never approach such heights again. But he did manage commercial success with such pop acts as America and the Little River Band and produced two top James Bond themes—Shirley Bassey’s “Goldfinger” and McCartney’s “Live and Let Die.” Martin had intended the production and scoring of “Candle In The Wind ’97,” Elton John’s tribute to Princess Diana at her funeral, to be his last single. But in 2000 he produced “1,” a multimillion-selling compilation of Beatles’ No. 1 songs, then followed with a six-CD retrospective of his recording career.

Martin was married twice, and had two children, actor Gregory Paul Martin and record producer Giles Martin, with whom his father remixed Beatles music for a 2006 Cirque du Soleil production, “Love.” In his later years, Martin—with his fine white hair and beautifully tailored clothes—was a treasured figure on Britain’s music scene. He played a prominent role at Queen Elizabeth II’s Golden Jubilee concerts in 2002, leading a cheer of “hip hip hooray” in her honor, and was sometimes seen at Royal Festival Hall when Brian Wilson performed.

The career exacted a price—Martin’s hearing was badly damaged—but left him with a few regrets. He wished he had paid more attention to Harrison’s songs, but acknowledged that Lennon-McCartney was an impossible act to top. And he learned that the Beatles, no matter how irresistible, worked best in English.

In Martin’s memoir, he recalled demanding that the Beatles record a pair of hits, “She Loves You” and “I Want to Hold Your Hand,” in German, appealing to a country where the group had performed often in its early years.

The Beatles were enraged, and refused to show up for the session. The usually patient producer hurried over to their hotel, stormed into their room and chewed them out as band members fled and then repented. “One by one, Beatle faces appeared from Beatle hiding-places, looking like naughty school boys, with sheepish smiles,” Martin wrote.

They came to the studio the next day and taped “Sie liebt dich” and “Komm, gib mir deine Hand,” which proved no catchier than their titles.

“But of course they were right,” Martin wrote. “Beatles records, in English, were to sell in millions in every country, Germany included. Never again did they make a record in a foreign language.”