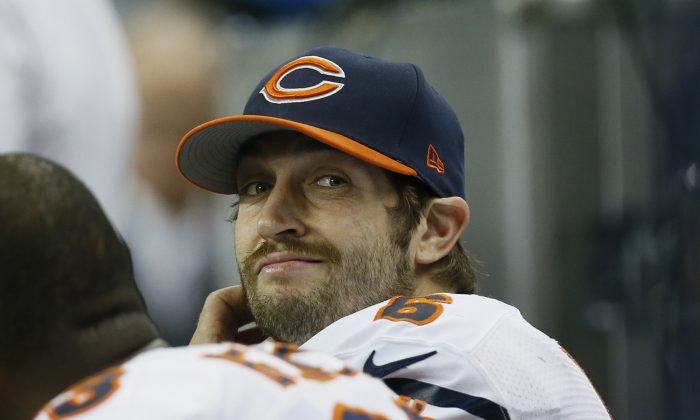 Chicago Bears quarterback Jay Cutler looks towards the scoreboard during the second half of an NFL football game against the Detroit Lions in Detroit, Thursday, Nov. 27, 2014. (AP Photo/Paul Sancya)
NFL

So it has culminated into this.

Just a brief review of the series of events that took place earlier this week, in the week leading up to the Bear’s eventual loss to the New Orlean Saints on Monday Night Football, an anonymous member of the Bears organization criticized Jay Cutler in a NFL Network report.

Though Jay Cutler said the comments didn’t affect his performance on Monday Night Football, he nevertheless continued his increasingly poor play of late, throwing 3 interceptions and taking 7 sacks versus the Saints.

Per NFL Network’s Mike Silver, Trestman felt he could no longer start Cutler “simply to justify a contract” when his on-field performance was so poor.

Though Cutler has committed a league high 24 turnovers on the season, Clausen has not started a game since 2010, when he posted a 58.4 passer rating in 13 games.

With some suspecting that this is Cutler’s exodus from Chicago, NFL.com’s Dan Hanzus has likewise listed eight potential destinations for Jay Cuter.