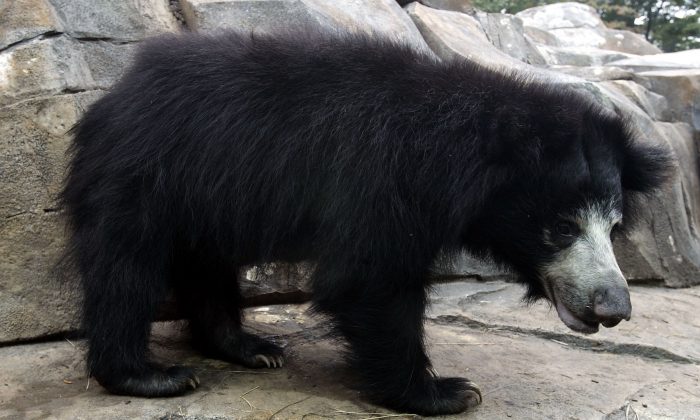 A sloth bear is shown at the National Zoo in Washington D.C. (Alex Wong/Getty Images)
India

Bear attack: A sloth bear attacked and killed one person and seriously injured three others in India, authorities said.

Rai Singh Tomar, a 22-year-old resident of Golgaon village in the state of Bhopal, was killed in the Wednesday evening attack, reported the Times of India.

The bear initially attacked a cow and then a buffalo before it attacked Tomar, consuming half of his body, according to the Times.

Relatives who tried to save Tomar were also mauled by the bear, sustaining injuries.

One of the injured relatives, 60-year-old Ramchandra Tomar, was rushed to Hamidia Hospital and is said to be in critical condition.

Rai Singh Tomar is survived by his wife and 4-year-old son.

The bear apparently was not captured or killed. The local forest department was reportedly informed of the bear on Monday and said efforts would be made to capture the animal.

The news comes after an Alaska man fended off a brown bear attack earlier this week.

“When the bear was headed towards us, we were like, ‘OK, it’s do or die now,'” Toby Burke, a wildlife biologist for Kenai National Wildlife Refuge, was quoted by ABC News as saying.

Burke was with his wife and three children bird watching in southern Alaska when a bear approached them.

“We were raising our arms and made loud noises,” wife Laura Burke said. “That’s supposed to scare the bear away. Instead of running away, it came right towards us.”

Toby Burke then swung a scope at the bear, which caught it in its mouth. He then grabbed a piece of the broken scope and hit the bear again before it ran off.