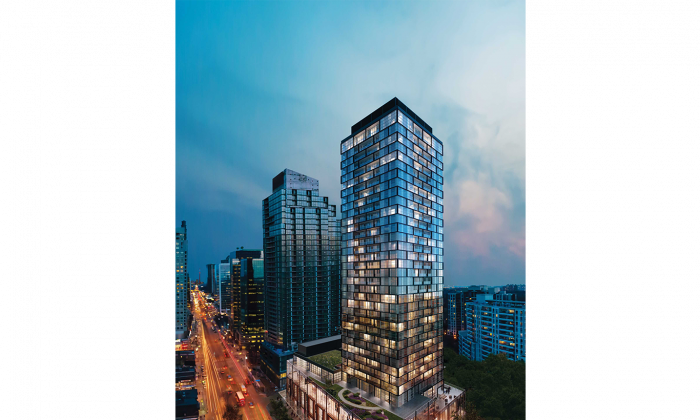 Beacon Condos will be a 35-storey tower with 274 residences, all with balconies. It will be a green building, with occupancy sensors in common areas to reduce electricity costs, energy-efficient lighting, water-wise fixtures and appliances, and low-VOC paints and finishes. (Sorbara Development Group)
Canadian Content

As the snow begins to blow and the cold winds start to howl, it’s comforting to know that Beacon Condos, a new project by Sorbara Development Group at 5200 Yonge Street, will have direct access via an underground walkway to the North York Centre subway station.

“You’ll never have to go outside on a cold winter day,” says Moira Morris, Sorbara’s director of sales and marketing. “You can go underground to the subway and get right downtown.”

Designed by Wallman Architects and Rafael+Bigauskas Architects, Beacon Condos will be a 35-storey tower with 274 residences ranging from 487-square-foot one-bedroom units to 1,346-square-foot two-bedroom-plus den suites.

Penthouses and terrace suites are slated to be released for sale in February, in a special purchasers’ event that Morris tells Epoch Times has been planned to coincide with Chinese New Year celebrations, a testament to the value the developer places on this particular market.

Beacon Condos’ underground connection to the subway has been an especially big selling point with Asian buyers, particularly those who are attending university in the city centre.

“The brokers buying on behalf of their clients, a lot of them are attracted to this project because you are a half hour from downtown by subway, but you’re paying less than you would be paying per square foot in the core,” Morris explains.

Beacon Condos might be tied directly to transit, but it’s also conveniently located for drivers, situated right on Yonge St. and in close proximity to major highways and surface routes.

When the weather is more pleasant, the pedestrian-friendly streetscape along Yonge offers trendy restaurants, shops, and services. Beacon is just down the street from Empress Walk, a retail-condo complex with Cineplex movie theatre, Milestones restaurant, LCBO, and Loblaws. And it’s in close proximity to the community amenities that abound in the heart of North York, including Douglas Snow Aquatic Centre, a public library, and Mel Lastman Square.

Beacon Condos itself will have 54,000 square feet of retail and commercial space located within its podium. No tenants have been signed to date, but Morris indicates that her team is looking to bring in larger luxury-brand retailers that will “elevate the brand of the building.”

Most importantly, all units at Beacon Condos will have balconies. “It’s critical,” says Morris. “People want that outside space because it makes the units feel more open. Plus it gives the building a great-looking facade.”

Amenities are in abundance at Beacon. The third floor will have a dining room with kitchen, a lounge with double-sided gas fireplace and bar, a gaming and billiards room, and a theatre room.

There’ll be a Zen spa lounge with private treatment rooms, his and her steam rooms, and yoga studio and sculpting gym that opens onto an outdoor terrace, with meditation reflecting pool, fireplace, and lounge seating. Beacon will also have a fitness centre with showers and steam rooms, two guest suites, and 24-hour concierge.

The amenity spaces will be well-appointed, but not so elaborately that it results in exorbitant condo fees down the line, Morris makes clear. There is no costly pool here to maintain, for example (swimmers can always head down the street to Douglas Snow, she notes.)

Beacon Condos will be a green building, with occupancy sensors in common areas to reduce electricity costs, energy-efficient lighting, water-wise fixtures and appliances, and low-VOC paints and finishes.

The Sorbara Group, a family company, has been building in the GTA for over 60 years, with projects that include 32 Camden, 400 Wellington, Sixty Bathurst, and Brewery Lofts.

The group’s latest project, 210 Simcoe, a 294-unit development, is currently under construction and scheduled for completion in 2015.

The developer has owned the land where Beacon Condos will be built since the 1960s, Morris points out. It was previously home to a McDonalds and a TD Canada Trust. “We’ve seen a huge evolution in the area over the years,” she says. “The landscape in North York has really changed.”

And with construction set to start on Beacon Condos next spring, more changes are about to come.