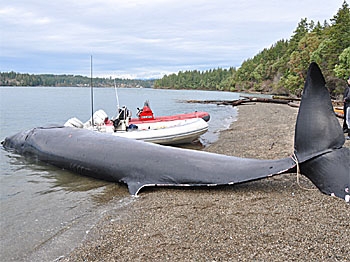 The first Bryde's whale ever found north of California washed up dead in Washington's Puget Sound. The whale was just under 39 feet long and appeared to be an immature male. (John Calambokidis/Cascadia Research)
US

Remains of Beached Whale Could Hold Clues to the Past

Genevieve Belmaker
Genevieve Belmaker is a former reporter and editor with The Epoch Times.
View profile
Follow
biggersmaller
Print
When reported sightings of an unusual lone whale in Puget Sound started coming in last month, it caught the attention of a nonprofit that protects threatened marine mammals. But when the whale—a breed typically found only in the waters off California and Mexico—died, a local Native American tribe was captivated.

The Bryde’s whale (pronounced brew-dees), was found within Squaxin Island tribal land, and after some internal debate, tribal leaders decided it was their responsibility to take care of the remains.

The animal was first reported dead on Jan. 16, and three days later it was in the hands of the regional office of the Marine Mammal Stranding Network, the nonprofit organization Cascadia Research Collective, and the Squaxin Island tribe.

Typically, beached whales are dragged out to deeper waters to decay by federal fisheries authorities. But this time was different.

“We had to ask ourselves, ‘is this whale important to us?’” said Rhonda Foster, director of the Squaxin Island Tribe's Cultural Resources Department. “It died in traditional territory, and didn’t go to any other tribes’ territories, [so] we decided it was a gift.”

With just over 1,000 members, the Squaxin tribe is still closely tied to their land, customs, and traditional food—including oysters, clams, geoduck, and salmon.

According to Foster, whales are part of their past, too, as they recently discovered the remains of a false killer whale on their land, and have also found remains of whalebone tools. She thinks they are all clues to the tribe’s longstanding connection to the mammal, which played a role in dictating the unusual way they handled the discovery of the Bryde’s whale.

In the end, the tribe decided it was important for their “children, and children’s children” to document and preserve the remains of the whale.

A detailed animal autopsy of the nearly 39-foot animal was conducted, and while the results about possible disease won’t be known for months, it is clear that the whale wasn’t pushed into the inlet by a boat, as often is the case with beached whales.

“We have no idea what it was doing up here,” said Jessie Huggins, stranding coordinator for Cascadia Research Collective, who helped inspect the whale after it was brought in with the help of a local shellfish company. It is the first recorded Byrde's whale seen north of California.

Cascadia Research Collective monitors whales from south Puget Sound using long-term photo IDs of humpback, gray, and blue whales, but didn’t get any photos of this whale while it was still alive. Until the final results of the autopsy come in, the organization’s “best guess” is that it starved to death, since its stomach was empty and its blubber layer was extremely thin.

Had they found the stray whale while it was still alive, however, its chances of survival might not have been much better. Huggins says not much can be done to help other than monitoring them. But the chain of events in this case remains mysterious.

“The strangest thing is that we’ve just never seen them here before,” says Ms. Huggins. “You leave with a lot of extra questions, like ‘why was it here?’”

Since the autopsy, the Squaxin tribe has been painstakingly cleaning the bones of the whale, preparing it for display in its tribal museum on the western side of the Puget Sound.

The preservation is part tribal heritage and part anthropological contribution. The tribe regularly works with Canadian and Alaskan anthropologists who sometimes find whale bones at archaeological sites, but have nothing to compare them with.

Foster hopes the Bryde’s whale will contribute to scientific research about the migration paths of these and other whales in the Pacific Ocean—both now and in the past—and how their natural circle of life might have been knocked off-balance by man.

“My message is that whales are important to everybody in Western Washington,” says Ms. Foster. “We felt we needed to respect the whale … [and] culturally needed to do something with this whale.”