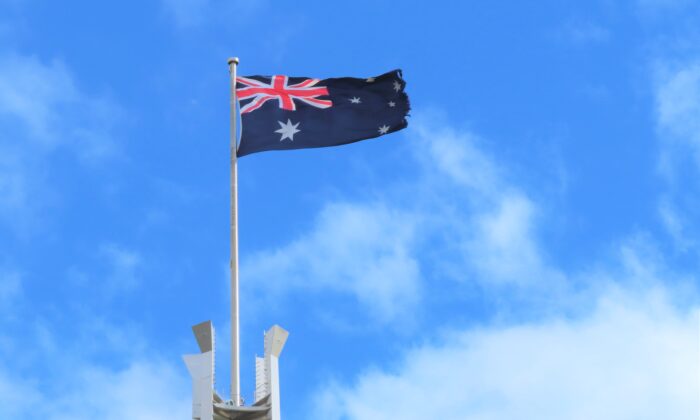 The Australian flag is seen on the Parliament House in Canberra, Australia, on April 1, 2022. (Rebecca Zhu/The Epoch Times)
Viewpoints

Be Wary of the Path to an ‘Elected Dictatorship’

On Saturday, Australia is having another federal election. These elections are generally held every three years because the Australian Constitution specifies that the maximum term of a parliament is three years.

Of course, democracy is much more than just holding such elections. It takes far more than parliamentary elections to make a sound democracy. For example, political accountability is also very critical to the preservation of a truly functional democracy.

However, accountability is not possible in a country where political power is too concentrated in the hands of a few individuals or a group of individuals. This concentration of powers occurs as a natural consequence of a flawed system that works as a negation of the classic doctrine of separation of powers.

Because our present system of government completely blunders the executive-legislative divide, Suri Ratnapala, one of the nation’s leading constitutional law professors, explains that, in Australia, “the executive government is the master of the legislative agenda, gaining a degree of power over the legislature not enjoyed even by the Tudor monarchs.”

Sir William Ivor Jennings was a British academic lawyer and a leading authority on constitutional law. In his influential “The Law and the Constitution,” a definitive book on the workings of the then British Constitution, Sir William reminds us that “all power is likely to be abused unless it is adequately checked.”

Of course, by trying to find a solution to this particular problem, the Baron of Montesquieu, in his classic “The Spirit of the Laws,” concluded: “It is necessary from the disposition of things that power should be a check to power.”

His statement of reasons for properly separating the executive and legislative arms of government contains this important element of truth: “When the legislative and executive powers are united in the same person, or in the same body of magistracy, there can be then no liberty, because apprehensions may arise, lest the same monarch or senate should enact tyrannical laws, to execute them in a tyrannical manner.”

These days, the executive role of the Crown has been entirely reduced to nothing but a mere formality. We know very well that the Queen’s “representative” in Australia has no choice but to assent to every legislation duly laid before them; and that they have no power to hire or fire ministers or judges without the approval of those who command the majority in parliament.

Under the existing concept of “responsible government,” the ministers of state are invariably legislators drawn from the parties which dominate the legislature. As such, the minister who loses the “confidence” of parliament has necessarily to resign.

This assumption of “ministerial responsibility” is no more than a “laughable fiction,” says Ratnapala. After all, as he authoritatively explains, “The logic of this view is seriously weakened by the fact that … the legislature obeys the executive which is in office precisely because it commands the loyalty of a majority in parliament … Courts and administrative review tribunals remedy individual grievances but cannot address the general problem of the systematic arbitrariness of government.”

Therefore, we should not be surprised by the outcome of cases like Kassam v Hazzard; Henry v Hazzard, whereby Chief Justice Beech-Jones of the New South Wales Supreme Court summarily dismissed the plaintiffs’ argument concerning the unconstitutionality of “public health orders” that violate bodily autonomy and the right to privacy.

What I have mentioned above effectively amounts to the institutionalisation of an “elected dictatorship,” to which Lord Hailsham so eloquently referred in his 1976 Dimbleby lecture.

Lord Hailsham had a deeply influential career in law, where he was Lord Chancellor in the United Kingdom for 12 years after 1970. The phrase “elective dictatorship” was coined by him to describe the reality of a parliament that is entirely dominated by the government of the day, so that such a government is accountable to no one and its bills virtually always pass the legislature due to the imposition of party discipline on the governing party’s majority.

Of course, as Albert Venn Dicey once pointed out, even such an “elective dictatorship” is bonded by one crucial limitation: “The possibility or certainty that his subjects, or a large number of them, will disobey or resist his laws.”

Dicey was a leading constitutional lawyer and professor of law at Oxford University from 1882 to 1909. After stating in Introduction to the Study of the Law of the Constitution (pdf) that the exercise of arbitrary power is always “limited on every side by the possibility of popular resistance,” he proceeded to remind us that such limitation will exist “even under the most despotic regimes.”

We should therefore be reminded of the words expressed by American abolitionist Wendell Phillips on Jan. 28, 1852: “Eternal vigilance is the price of liberty; power is ever stealing from the many to the few.”