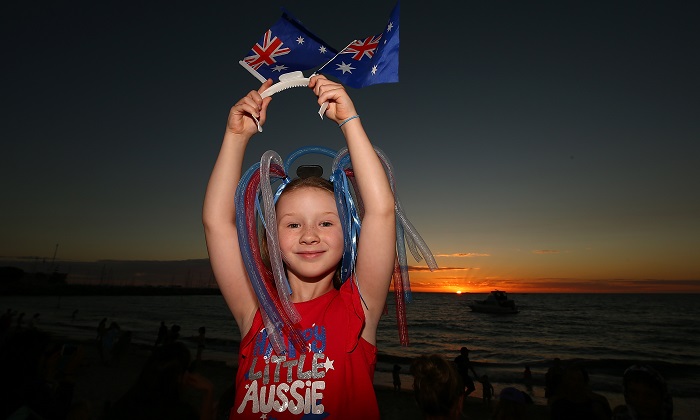 A young girl proudly displays Australian flags as the sun sets at Bathers Beach on Jan. 26, 2017 in Fremantle, Australia. Fremantle Council held an alternative celebration on Jan. 28, following growing “political correctness.” Local Fremantle businesses raised the money to hold the traditional Australia Day fireworks on the 26th despite the Council's decision. Australia Day, formerly known as Foundation Day, is the official national day of Australia and is celebrated annually on Jan. 26 to commemorate the arrival of the First Fleet to Sydney in 1788. (Paul Kane/Getty Images)
Australia

Be Forgiving, Not Offended on Australia Day, Says Indigenous Councilor

People offended by the date of Australia day need to grow up, says an indigenous town councilor from Alice Springs who has joined efforts to voice why there is no need to change how the national day is celebrated.

Jacinta Price is front and center of a campaign to keep Australia Day on Jan. 26 — the date that the First Fleet arrived in Australia in 1788, resulting in the British colonization of the country. Some indigenous groups call the date “Invasion Day,” and some left-wing groups like the Greens want the date changed, saying it is offensive.

Price, a mother of four and herself the daughter of a past Northern Territory government minister, told ABC’s The Drum that what she is seeing is political divisiveness being furthered by a minority group of people who claim to be offended by what occurred in 1788.

“[We need to] act forgivingly towards the rest of non-indigenous Australia, considering they were not actually responsible [for] what happened to Aboriginal people in 1788,” she said.

"Don't #changethedate just because people claim to be offended." @JNampijinpa explains why she wants to keep celebrating #AustraliaDay on January 26 #TheDrum pic.twitter.com/ikllTv9K6d

Australia’s national day last year saw a protest in Sydney. Some local council decided to not recognize the date and some activists have pushed to change the date to May 8 — because it sounded like “mate,” a beloved Australian word that describes a friend.

“If it was in fact impacting on Aboriginal people’s lives… that it would save a life, a single life, then yeah, I’d say change the date [but] otherwise, let’s be adults,” Price said. “And yes, look at how we can recognize our country’s history in all of its complexity and entirety.”

She said that people offended by the date of the British landing at Botany Bay need to be grown up enough to say “we have to forgive at some point.”

There are bigger issues that need addressing, she said, such as poverty among indigenous communities in remote parts of the country.

Mark Latham and indigenous councillor Jacinta Price have launched a new campaign to SAVE Australia Day!

He says those who want to #ChangeTheDate are 'out of touch' with everyday Aussies.

Protestors want to change the day to a national day of mourning called ‘Invasion Day’. pic.twitter.com/UuyqSKcWWP

The issue of changing the date is one based on emotion, Price said.

“It’s a choice to be offended. I don’t think people feel pain as a result of this,’ she said.

“The people living in pain and crisis are living it silently in remote communities of Australia and they’re being completely disregarded,” she said.

“Their issues are being placed to the side because other people have claimed offence and claimed pain. It’s an emotion they claim to feel.

“If people feel angry, do we encourage people to act on that impulse of anger? If people have anger management issues, we tell them to get help to deal with that particular emotion because it’s their responsibility,’ she said.

“I just would like us to grow up as a nation a little bit and be more responsible in that regard, responsible for our own feelings.”

“I just think it’s ridiculous the amount of fuss that’s been kicked up about Australia Day and the so-called need to change it so certain Aboriginal people can feel better about themselves."

She said if the date was altered then that would not be the end of it.

“If we change the date, there will be another demand and that’s the reality of it,” Price said. “Once these particular issues gather momentum, well then it’s just gone beyond ridiculous in that we are just pandering to people because they feel offended,” she said.

In advance of the national day falling later this month, Price has joined former federal Labor leader Mark Latham in the launching a “Save Australia Day” ad campaign which depicts an Orwellian future when the date is banned.

Latham said the theme is suitable given the current political climate.

“In an environment where you have so much political correctness, where certain words, themes and values are banned in public institutions, I think the Big Brother approach, that dystopian theme, is very appropriate,” Latham told reporters, according to AAP.

Latham said he and Price are seeking a more positive view of the national day among members of the country’s indigenous people.

“A lot of terrible things happened in the 19th and 20th centuries, no one’s wiping that history away, but we can’t rewrite that history,” Latham said.

“What we can do is adopt Jacinta’s agenda of finding positive solutions so all indigenous people benefit from the western civilization opportunities that came here in 1788.”

According to the latest Guardian Essential poll, a majority of Australians want to leave Australia Day where it is — on Jan. 26, and 70 percent say they believe everyone can celebrate on that date.