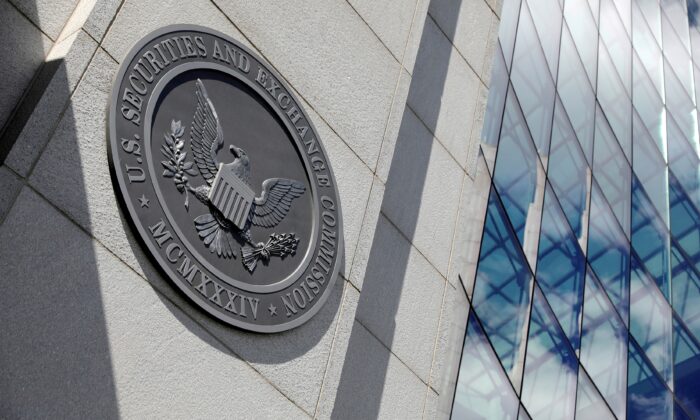 The seal of the Securities and Exchange Commission (SEC) is seen at their headquarters in Washington on May 12, 2021. (Andrew Kelly/Reuters)
Viewpoints

One of the subtlest and most perfidious paths through which the cabal of elitist activists, industrial and commercial interests, and national and international politicians and bureaucrats are trying to “reset” capitalism to prioritize “woke” social justice and green priorities is through the co-opting and takeover of global capital markets: banks, insurance, and stock and bond trading and investment.

Big financial institutions such as Bank of America and Mastercard, investment managers such as BlackRock and Vanguard, and hundreds of corporations are going all-in to push environmental, social, and governance (ESG) metrics.

These powerful institutions would have ESG metrics replace capitalization, revenue, profits, and profit margins as the new way of evaluating businesses. Under ESG, returns on investment and returns to stockholders and owners are not as important as a company’s embrace of left-wing causes. These causes include how “green” a company is, having the “right” ratio of minorities on its board, avoiding involvement in politically disfavored industries (such as gun manufacturing and fossil fuel production), and other woke leftist considerations.

Companies are given a score or rating to determine how well they align with ESG goals, and banks will use these scores to make lending and other commercial decisions. Portfolio managers will use them to determine investment recommendations and propose initiatives and board choices to be offered at annual meetings.

Hundreds of the world’s largest corporations, including financial institutions, have already implemented ESG systems and reporting metrics within their companies. What’s more, investor groups worth trillions of dollars have pledged to prioritize these companies over those that refuse to participate.

For instance, BlackRock and other investment fund managers are pushing board memberships for green and gender activists and pushing initiatives to force the companies, in which they control large chunks of stock, to adopt policies that undermine their business model. For instance, they’re pushing ExxonMobil and Chevron to get out of fossil fuel development, the very raison d’etre for the two companies’ existence.

In doing so, these companies are using the stocks placed in their management hands to promote the social goals supported by their executives, rather than to promote the income and retirement goals of the individuals and public and private pension funds of the stock’s ultimate owners. Rather than aiming at maximizing profits and increases in stock value to benefit individual stock owners or provide employees a secure, comfortable retirement, the companies are placing social equity and environmental justice goals at the center of their “investment” strategies.

This is dangerous for stock and bond owners, since research consistently shows funds guided primarily by ESG goals produce lower returns and are far riskier than investment portfolios guided by profits and generation of wealth for their investor/owners.

In addition, working with the United Nations, big banks formed the Net-Zero Banking Alliance (NZBA) developed in April 2021. The NZBA includes 94 large banks from 39 countries (and growing) that have pledged to “transition all operational and attributable GHG [greenhouse gas] emissions from our lending and investment portfolios to align with pathways to net-zero by mid-century, or sooner, including CO2 emissions reaching net-zero at the latest by 2050.”

In practice, this means banks are planning to force businesses, investors, and hard-working Americans to adopt policies in line with banks’ climate change agenda, regardless of whether they agree with the banks’ goals or whether those goals are good for the people’s and companies’ economic well-being.

The Trump administration tried to tap the brakes on efforts by corporations and federal agencies to impose social justice and environmental requirements. Trump policies included ensuring ERISA plans (pension plans operating under the Pension Reform Act of 1974) regulated by the Department of Labor be managed with a sole and unwavering focus on providing for the retirement security of American workers.

Also, under President Donald Trump, the U.S. Office of the Comptroller of the Currency proposed a rule to prohibit banks with more than $100 billion in assets from denying services such as lending and payment processing to businesses based on political considerations such as the type of industry they are in or whether they have adopted ESG codes, as opposed to normal business considerations, such as a company’s earnings, business prospects, assets, profit and loss statements, capitalization, and credit history.

President Joe Biden is actively rolling these rules back. Biden’s executive order on climate-related financial risks “mandates that Labor Secretary Marty Walsh submit a report to the director of the National Economic Council and the White House national climate adviser within 180 days that identifies actions taken by the agency ‘to protect life savings and pensions of U.S. workers and families from climate-related financial risk,’ and required the same of the Federal Retirement Thrift Investment Board, which administers the Thrift Savings Plan for federal employees,” 401K Specialist reports.

In addition, at Biden’s direction, the U.S. Securities and Exchange Commission (SEC) has created a 22-member Climate and ESG Task Force to enforce the administration’s social justice and climate change goals. Simultaneously, the SEC issued a call for public comments on a rule to require publicly traded corporations, investment management firms, and mutual funds under its regulatory purview to disclose the climate-change-related risks and opportunities they might face.

To be forewarned and informed is to be forearmed.

Become an active voter, bank account owner, and investor. It’s no exaggeration to say the fate of Americans’ investments and pensions, whether people will be able to retire comfortably at a reasonable age, and whether markets will be used to build wealth or to push people in directions that elites deem politically correct will be decided in the next two elections (federal, state, and local), in courtrooms, and during proxy battles at annual board meetings in the next few years.