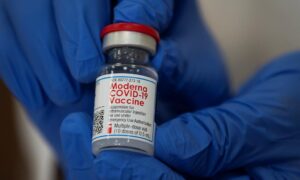 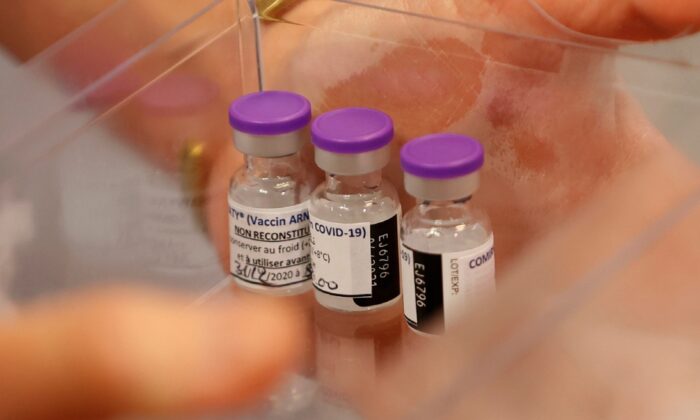 A health worker carries doses of the Pfizer-BioNTech COVID-19 vaccine at the Rene-Muret hospital in Servan, near Paris, on Dec. 27, 2020. (Thomas Samson/Pool Photo via AP)
Canada

VICTORIA—British Columbia’s top doctor says the first dose of a vaccine for COVID-19 gives “amazing” immunity, so the government’s decision to allow for a 35-day gap before the second dose is administered is rooted in science.

She says the decision to delay the second shot is about maximizing the vaccines’ distribution while balancing the supply and making sure the province has a safe and effective immunization program.

Henry says the first dose primes the immune system while the second shot gives it a boost and waiting between jabs allows the body to build up that immunity.

B.C. recorded 22 more deaths over a three-day period for toll of 1,010, while there were 1,475 new infections over the same period.

Henry says protection from COVID-19 two weeks after the first dose of either the Pfizer-BioNTech or Moderna vaccines was over 92 percent.

“That is, quite frankly, amazing from a public health perspective looking at an immunization program,” she said. “What we’re learning is that the short-term protection is achieved rapidly, and it’s very high.”

Health officials are also watching closely how effective the vaccine is when the time between doses is extended.

“Is there an issue between the six weeks and 12 weeks, for example?” Henry says.

“We’ll be monitoring and changing our program if needed, depending on how much vaccines we have, and what we’ve learned about the effectiveness of the booster.”

Henry also says about a 70 percent herd immunity can help prevent transmission in most cases. Although it may not prevent some super-spreader events, it could be enough to stop widespread community transmission, she adds.

The Interior Health authority declared an outbreak on Monday after the “rapid spread” of COVID-19 in Canim Lake, B.C.

The authority says it has identified 32 cases among people who are linked to Canim Lake and live in the area, which is near 100 Mile House.

It says it’s working with the First Nation at Canim Lake, the First Nations Health Authority and B.C.’s emergency management program to co-ordinate the response to the outbreak.

A Facebook post by the Northern Shuswap Tribal Council, which includes the Canim Lake Band, says the community was locked down on Friday after nine COVID-19 cases were diagnosed among its members.

The post says a curfew is in place from 9 p.m. to 7 a.m. until further notice, with checkpoints set up to restrict traffic in and out of the community.

By Hina Alam in Vancouver