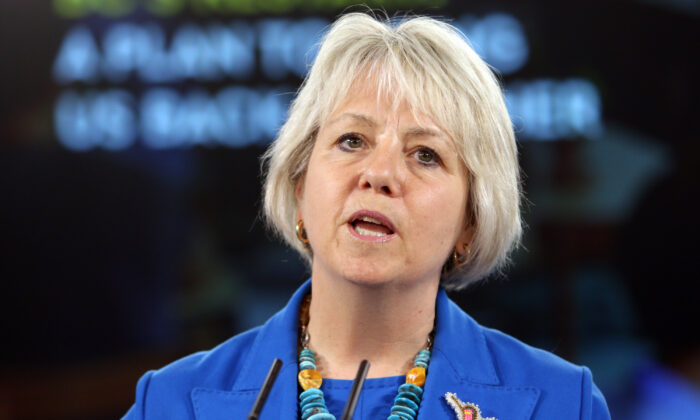 Provincial Health Officer Dr. Bonnie Henry speaks during a press conference at the Legislature in Victoria, on May 25, 2021. (Chad Hipolito/The Canadian Press)
Canada

British Columbia will take the “cautious step” to reopen gyms and fitness centres with a capacity limit on Jan. 20, the provincial health officer says.

Dr. Bonnie Henry said in a Jan. 18 press conference that individual and group exercise in gyms and fitness facilities will be allowed to resume with capacity limited to seven square metres for each person.

The B.C. Vaccine Card will also be required, while masking is encouraged for people exercising and required for personal trainers and instructors at all times.

The province will extend COVID-19 restrictions on other gatherings until Feb. 16, including the closure of bars and nightclubs and maintaining a 50 percent capacity limit for theatres, stadiums, and other venues.

“I think there’s a narrative around right now that Omicron is mild,” Henry said.

Henry said the decision to reopen gyms and other fitness facilities was worked out with a group representing the fitness industry, which welcomed the announcement.

Carl Ulmer, a board member of the Fitness Industry Council of Canada, said the group has been concerned about saving the industry, which was forced to close in December 2021.

“We are business owners, and the last few weeks have been incredibly hard for all of us,” Ulmer said.

During the Jan. 18 press conference, Henry also noted that the province is expecting 4,000 doses of the Pfizer COVID-19 oral antiviral pill Paxlovid “in the next few weeks.”

On Jan. 17, Health Canada gave emergency-use authorization for the drug’s use in adults with mild or moderate COVID-19 who are at high risk of becoming more seriously ill.

“It includes those people in our community who are older, over age 70, clinically extremely vulnerable, immune-compromised, and for younger people who have additional medical conditions and don’t have the protection of vaccines,” Henry said.

The drug must be started within five days of onset of COVID-19 after it’s diagnosed through testing. Henry said while the province currently has a limited supply of it, preference will be given to those most at risk due to underlying illnesses, vaccination status, and age.

She added that Health Canada is also reviewing two other COVID-19 vaccines from Medicago and Novavax for potential approval.

On Jan. 17, Henry directed the province’s 60 school districts to collect information on the staffs’ vaccination rates, which she said was aimed at supporting districts in making decisions about vaccine mandates.