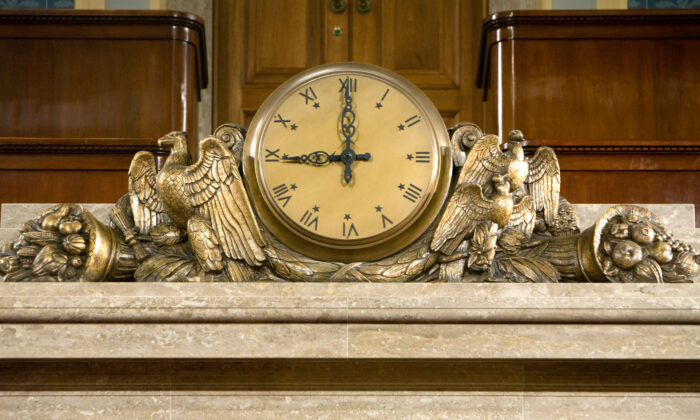 A clock over the Speaker's rostrum in the U.S. House of Representatives chamber is seen on Dec. 8, 2008 in Washington, DC. (Photo by Brendan Hoffman/Getty Images)
Canada

Permanent daylight saving time (DST) could soon be a reality in the province of British Columbia following a U.S. Senate vote to stop changing the clocks twice a year.

In 2019, B.C. had outlined a plan to switch to DST permanently, but the legislation did not set a date because the province was waiting for neighbouring U.S. states of Washington, Oregon, and California to also approve the change.

On March 15, U.S. senators voted unanimously to pass a bill to make daylight saving time permanent. The bill, known as the Sunshine Protection Act, will now go to the House of Representatives for review. Once passed there, it will head to U.S. President Joe Biden for approval.

If it passes, it is expected that the three U.S. pacific states will move to permanent daylight time.

In a Twitter post, Horgan said that he was “pleased to see the progress” from Washington, D.C. on this long-debated issue.

“For British Columbia families who have just had to cope with the disruptions of changing the clocks, this brings us another step toward ending the time changes permanently,” he said on March 15.

The B.C. government introduced legislation to make daylight time permanent after a public survey conducted in 2019 showed 93 percent of more than 223,000 respondents were in favour.

Those who preferred to keep permanent daylight time cited safety, health, and wellness concerns as key reasons for supporting the observance, a final report from the 2019 survey said.

In Canada, only the Yukon and most of Saskatchewan were exempt from changing their clocks on March 13, while the rest of the country turned the clock one hour ahead.

Joseph Lord and The Canadian Press contributed to this article