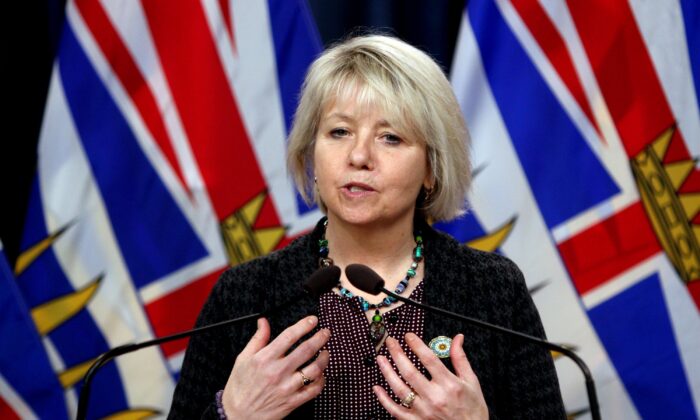 British Columbia’s Supreme Court chief judge has dismissed four legal challenges to some of the province’s now-suspended COVID-19 health measures regarding mandated vaccination as well as adverse side effects that some B.C. residents suffered as a result.

Chief Justice Christopher Hinkson ruled in one of the cases that Dr. Bonnie Henry, the provincial health officer, had properly followed available scientific research and B.C.’s public health guidelines in advising the government to mandate vaccination for health care workers, according to the Vancouver Sun.

The case originally came before the court when the Canadian Society for the Advancement of Science in Public Policy (CSASPP), a nonprofit and volunteer-based organization created to challenge B.C.’s COVID-19 health measures, filed a constitutional challenge against the province for its health orders.

CSASPP argued that mandating vaccines for health care workers went against Canadian Charter rights and that the government did not allow for reasonable vaccination exemptions, particularly for individuals objecting on religious and health grounds.

Hinkson said he ruled against CSASPP’s challenge because he believed Henry correctly followed the idea that public health measures be proportionate to the threat they are combating.

The second case Hinkson rejected was a challenge to the province’s vaccine passport system on the grounds that it discriminated against disabled people who were at higher risk of suffering adverse side effects from COVID-19 vaccines.

Hinkson’s third ruling was also related to the province’s vaccine passport system, as an individual challenged that it “offended his right to liberty in an arbitrary manner,” reported the Vancouver Sun.

Hinkson’s fourth dismissal was against three B.C. residents who alleged that the province did not provide effective access to medical vaccination exemptions.

One of the individuals, William Robertson Prendiville, received his first COVID-19 vaccination in May 2021 and said he began feeling chest and upper-body pain, which his cardiologist classified as an adverse reaction to the vaccine. Prendiville managed to obtain a medical exemption from further vaccination, but said he was not allowed to enter many B.C. businesses on account of not being fully vaccinated.

Dawn Slykhuis, another B.C. resident named in the court challenge, said she experienced sharp pains on the left side of her head after receiving a Pfizer vaccine in April 2021. Slykhuis proceeded to request an exemption on “religious or conscience” grounds but was denied.

Leigh Anne Eliason, the third individual in the case, said that her doctor had recommended she not receive a COVID-19 vaccine because she had several health issues, including kidney disease.

Her doctor submitted a list of reasons to the province’s health authorities outlining why Eliason should be exempt from any vaccine requirements, but Hinkson ruled that there was no evidence showing the doctor had ever submitted the exemption recommendation to the authorities.

“At present, Ms. Eliason and Ms. Slykhuis have not engaged with the reconsideration process and thus there is no final decision for this court to review,” Hinkson wrote, according to the Vancouver Sun. “I find that neither Ms. Eliason nor Ms. Slykhuis have exhausted all of their statutory remedies, and thus should not be permitted to pursue the relief sought in this petition until they have done so.”

Hinkson also wrote that he was “unable to find that Mr. Prendiville’s Charter rights have been infringed, and thus the relief he has sought in this petition is unjustified.”