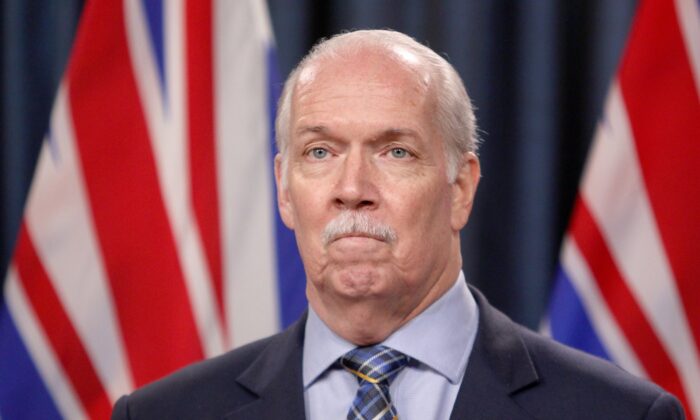 BC Premier Horgan Says He Will Not Seek Re-election

British Columbia Premier John Horgan says he will not seek re-election, saying he will resign after the New Democratic Party holds a leadership review this fall.

He made the decision in part due to health concerns after his recent cancer battle, he said in a statement on June 28.

Horgan, 62, announced last November that he was diagnosed with throat cancer after suffering from bladder cancer earlier in his 40s.

“As we reach the mid-point of our second term, it is clear the tasks ahead of us are enormous and will require a leader focused on the next two years and beyond,” Horgan said, referring to the next B.C. provincial election, which must be held by October 2024.

“A second bout with cancer and dozens of radiation treatments has led me to take stock. I am proud to say I’m cancer free,” he added.

“While I have a lot of energy, I must acknowledge this may not be the case two years from now. Therefore, I have decided not to run again in the next election.”

In a June 28 press conference, Horgan said he and his wife, Ellie, had recently spent about 10 days in his constituency on the west coast of Vancouver Island reflecting on what they wanted to do for the rest of their lives, before posing that question to his cabinet colleagues.

He concluded that he couldn’t continue to serve as leader for the next six years, and has asked the president of the B.C. NDP to work with the party’s governing body and executive to select a fall date for a leadership convention.

“There has been endless speculation as a result of my recent battle with cancer about what my plans would be. I want to put the speculation to rest so we can get back to what really matters, and those are the issues before British Columbia,” he said.

Horgan said the government will continue to address challenges in the province, including the high costs of living and improving the health care system.

A date for the NDP leadership convention has not yet been set.

Being the Premier of BC is not a job I ever expected, but it’s been the honour of my life.

Having just beat a second round of cancer, I’ve made the tough call not to run in the next election.

By working together and caring for each other, we’ve accomplished a lot. Thank you. pic.twitter.com/L1svGi4JEW

Several federal and provincial leaders took to social media to wish him well and express gratitude for Horgan’s contributions.

Prime Minister Justin Trudeau released a statement on June 28 expressing gratitude for his work, including on climate change policies, child care, and his efforts during the COVID-19 pandemic.

“I always appreciated working with you. Wishing you all the best, John,” Trudeau wrote on Twitter.

Saskatchewan Premier Scott Moe also thanked Horgan for the work he has done for British Columbia and Canada, despite their ideological differences.

“Thank you to the ever-capable Premier John Horgan for everything you have done for British Columbia and Canada. We may have our differences, but I’ve always enjoyed and appreciated working with you to help make a difference in our provinces. I am proud to call you a friend,” Moe wrote on Twitter on June 28.

Alberta Premier Jason Kenney said it had been a “real pleasure to work constructively” with Horgan on a range of issues.

“We come from different political traditions, but have always worked to find common ground,” he wrote.