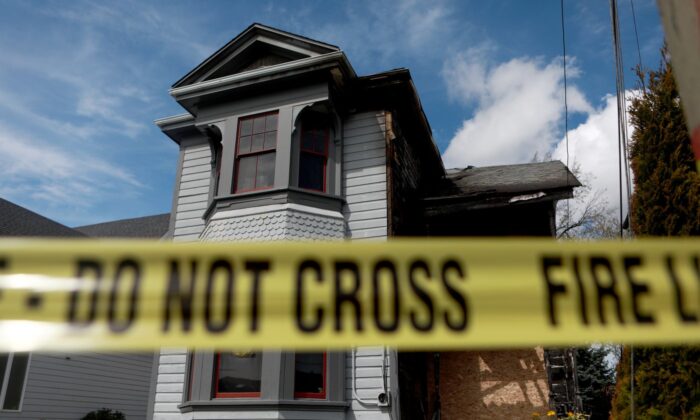 Police on April 21, continued to investigate an arson attack on the family home of a pastor in Victoria, B.C.. (The Canadian Press/Chad Hipolito)
Canada

The Ukrainian Canadian Congress has called on police in Victoria to investigate an arson attack on the home of a religious leader as a hate crime.

Gasoline was poured through the mail slot of the family home of Father Yuriy Vyshnevskyy, pastor of the St. Nicholas Ukrainian Catholic Church, the congress said in a statement on Thursday.

Five people were in the home early Wednesday when the fire broke out.

All made it out alive, although one child was injured and a woman needed to be rescued from a window ledge by fire crews, said Victoria police.

Const. Cam MacIntyre said Victoria police are investigating whether the arson was hate-motivated, but have yet to establish a motive.

“That’s something we will be looking at,” MacIntyre said in an interview. “We’re alive to the connection here between the family and the Ukrainian church.

“It’s very early in the investigation to be drawing conclusions of that nature. The motive is unknown but it is an arson. We obviously believe this fire was intentionally set.”

Police on Thursday released 16 seconds of video showing a vehicle passing through the area near the fire.

Investigators want to identify and speak with the driver and occupants.

The congress called the fire an attack on Vyshnevskyy, his wife and their three daughters, and called on police to thoroughly investigate.

“Given that Father Vyshnevskyy is a dedicated community leader, who through his work is strongly supporting the Ukrainian people and their defence of their homeland from Russia’s genocidal war, we call on local authorities to investigate this attack as a hate crime.”

Premier John Horgan offered his sympathies to Vyshnevskyy and his family during a news conference Thursday.

“We don’t know yet, as the investigation unfolds, whether it was directed at people’s faith, people’s ethnicity, we don’t know,” he said.

“But, what we do know is that all British Columbians stand with the Vyshnevskyy family today, in unison, saying with one voice, we’re with you and we’re here to help.”