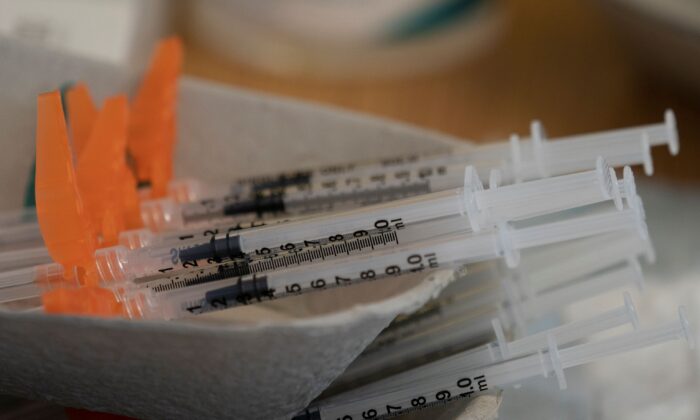 Needles are seen filled with COVID-19 vaccination at a truck stop along highway 91 North in Delta, B.C., on June 16, 2021. (The Canadian Press/Jonathan Hayward)
Canada

A British Columbia registered nurse has been suspended for six months by the province’s College of Nurses and Midwives (BCCNM) for creating fraudulent COVID-19 vaccination cards, according to a notice released by the college. The college says the nurse created four fake vaccination records in 2021.

Sarah Jones from Castlegar, B.C., was investigated by a panel of the BCCNM’s Inquiry Committee after an unknown number of anonymous complaints were levied against her for allegedly forging vaccine passports. The college said Jones presented “varied versions” of events to her employer, witnesses, and the college related to the alleged misconduct.

The BCCNM concluded that Jones’s actions constitute “professional misconduct” and said they “marked ethical departure from the conduct expected of a nurse.”

Before she can go back to her professions, the BCCNM says she is required to undergo “remedial education in Professional Ethics.”

Both the RCMP and the BCCNM wouldn’t confirm if Jones is being investigated by the police, reported the CBC.

BCCNM told The Epoch Times that it can’t provide further details beyond its statement.

Since the province enacted a vaccine passport system, it has seen a number of fraudulent activities related to the immunization records, including instances of individuals paying “vulnerables” to receive the vaccine under their name, according to the Vancouver Sun.

In a December 2021 statement, the B.C. government said that any submitted vaccine records into the Provincial Immunization Registry suspected of being fraudulent are “reported to law enforcement.”

British Columbia dropped its province-wide requirement to show proof of vaccination against COVID-19 to enter most public places and events on April 8, 2022, after having it in place for around seven months. But the province still requires that all of its “regulated health professionals” receive at least two shots of the COVID-19 vaccine to retain their positions. Private healthcare workers are exempt from the mandate.