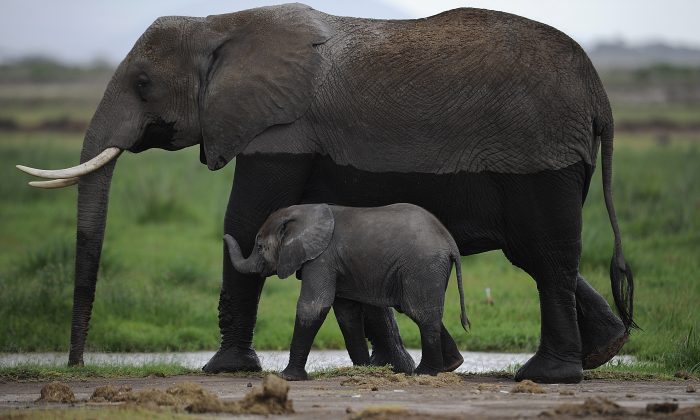 Elephants are seen at the Amboseli National Park in Kenya in December 2012. A B.C. man's innovative technology is helping stop the slaughter of dwindling herds of elephants. (Tony Karumba/AFP/Getty Images)
Canada

Thanks in part to a tech-savvy student at the University of British Columbia, rangers in northern Kenya and South Africa are tapping into technology to combat poaching.

Jake Wall, a PhD student in UBC’s geography department, works for the conservation group Save the Elephants, where he has helped outfit almost 100 of the mammals with GPS satellite-tracking collars.

“It gives us real insight into their day-to-day behaviour. At any given point they fire up Google Earth and check on the latest locations of the elephants and what they’re doing,” he said.

Researchers have used satellites to track the elephants’ movements for decades, but Wall then designed several software algorithms to crunch the live data and reveal patterns and, more importantly, any departure from patterns in their behaviour.

“We can look for behaviour such as an elephant that starts slowing down because it becomes injured or sick,” he said.

“We’re also very concerned with elephant poaching for ivory, so one of the algorithms I designed looks at whether an animal has stopped moving for a given period of time, which would signal that the animal has been killed.”

The system alerts a network of rangers, researchers, and conservationists who can be deployed to help.

The live feed also offers a glimpse into the elephants’ movements, interactions, and other behaviours that ultimately help conserve the humongous herbivores, many of which remain endangered because of the illegal trade in ivory.

Iain Douglas-Hamilton, founder of Save the Elephants, said the tracking has unveiled the secrets of elephants they’ve been seeking for decades.

“This novel integration of smartphone technology has allowed movement data to leap from the realm of applied research into a vital conservation tool that is used daily by anti-poaching forces,” he said in a statement.

Wall grew up in part in Kenya, and has worked for Save the Elephants for a decade. He will return to Africa in December.

“I feel like we’ve really just scratched the tip of the iceberg. There’s a lot of other behaviour that we could be looking for, and as tracking systems improve, our ability to collect data, and transmit it improves as well. We’re kind of riding the technology wave,” he said.

Wall, whose work is published in the journal Ecological Applications, says the system has already allowed the team to treat injured elephants and exposed poaching incidents.