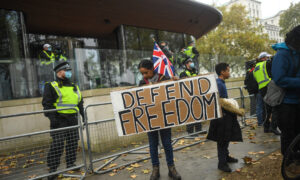 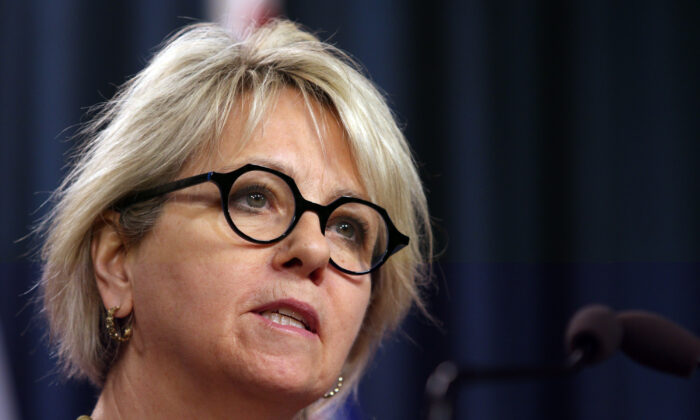 Dr. Bonnie Henry talks about the next steps in B.C.'s COVID-19 Immunization Plan during a press conference at Legislature in Victoria, B.C., Canada, on Jan. 22, 2021. (Chad Hipolito/The Canadian Press)
Canada

A British Columbia judge questioned whether the province’s top doctor appreciated the right to religious freedom when she issued COVID-19 restrictions that banned in-person worship services.

“She talks about needs of persons to attend in-person religious services, but that really wouldn’t capture the charter right that’s asserted by the petitioners … would it?” Hinkson asked.

“What she was obliged to do, surely, was to weigh the rights of persons, not their needs.”

Hinkson was referring to what Gareth Morley, a lawyer with the province’s attorney general ministry, had told him of Henry’s statement related to the orders she first issued in November 2020 and subsequently updated a month later.

Henry statements described how the B.C.’s health care system could have been overwhelmed with the quick surge in COVID-19 cases in the province last fall, which she said made it necessary to implement further restrictions to curb the spread while keeping schools and “essential” workplaces open, Morley told the court.

Informed by epidemiological data, Morley said Henry believed the accelerating cases posed significant risks to the province, and so issued the orders that she acknowledged may affect residents’ charters rights, but in a reasonable and appropriate way.

But Paul Jaffe, the lawyer who represents the petitioners, argued in court this week that Henry’s orders substantially and unjustifiably interfered with his clients’ right to freedom of religion.

Jaffe was asked by the Justice Centre for Constitutional Freedoms (JCCF), a Canadian legal advocacy organization, to lead the legal case against the B.C. government.

In response, the B.C. government filed an injunction against the three churches, which was denied by Hinkson on Feb. 17.

“To be clear, I am not condoning the [churches’] conduct in contravention of the orders that they challenge, but find that the injunctive relief sought by the [province] should not be granted,” Hinkson said at the time.

Morley defended Henry on Wednesday, telling Hinkson that the current orders which were amended in February, now include specific reference to the charter and freedom of religion.

He added prior to issuing the orders last year, Henry had sought consultation from faith leaders and had invited churches to submit their requests for exemptions with plans of how they would conduct their services that minimize the spread of COVID-19, which Jaffe had argued during a separate hearing in February that the three churches didn’t receive a response from the provincial government even though they applied for the exemptions.

But Jaffe had told Hinkson this week that the churches have been cautious in adopting the safety measures approved by Henry in places that remain open in B.C.

“The BC government allows hundreds of people to gather at any given time in a single big box store. Liquor stores and marijuana stores remain open. The government allows residents to gather and seat six at a table at bars and restaurants,” the JCCF said in a statement released on March 1.

“But to members of the faith community, Dr. Bonnie Henry has stated: ‘Do not attend a service at a church, synagogue, mosque, gurdwara, temple, or other places of worship.’”

Hinkson also asked Morley on March 4 whether the attorney general would concede to Alain Beaudoin, one of the petitioners, any of the relief he sought from the government.

Beaudoin was issued a $2,300 ticket by the RCMP when he organized a public protest on Dec. 12, 2020, against what he believes is an abuse of government power to impose COVID-19 restrictions on people, according to the petition to the court. He was also asked by police to hand over the personal information of every attendee at the protest, to which he replied wasn’t possible given people were coming and going in an open area.

Beaudoin is petitioning the court to relieve him from the fines the RCMP had issued him, and to put a stop to Henry’s orders prohibiting in-person gatherings and events.

Morley acknowledged that Henry’s restrictive orders at the time read as though outdoor assemblies were not allowed. He said it was only when she updated the order on Feb. 10 that she clarified gathering outside over matters of public interest or controversy remains allowed, provided people adhere to COVID-19 health measures, such as physical distancing.

“What we could say we would concede is a declaration that orders which prohibit outside gatherings for public protests are of no force and effect,” he said.

That concession would exclude the order made on Feb. 10, he added.

The hearing is scheduled to continue on March 5.