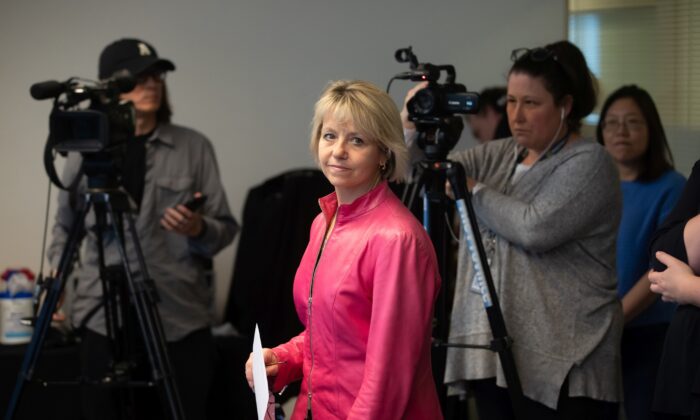 British Columbia provincial health officer Dr. Bonnie Henry arrives for a news conference to give an update on the coronavirus in Vancouver on March 18, 2020. (The Canadian Press/Darryl Dyck)
Canada

Scientific modelling shows B.C has more similarities with the hopeful trajectory of South Korea, than the tragedy playing out in Northern Italy, according to two of the province’s top health officials.

Yesterday, Provincial Health Officer Dr. Bonnie Henry and Deputy Health Minister Stephen Brown revealed some of the scientific modeling developed by health experts that has helped B.C. officials plan for, and track, the province’s fight against the spread of the novel coronavirus.

The data laid out some of the science rationale behind the province’s health care capacity-building to prepare for a potential massive influx of people all at once. For instance, if enough people developed serious symptoms of COVID-19 at the same time, they could overwhelm the province’s hospital resources, as seen in other jurisdictions around the world.

Part of the plan in B.C. includes designating the top 17 provincial hospitals as the ‘primary COVID’ hospital sites, with the smaller hospitals to act as back up during a surge, if needed.

In Northern Health, this means the University Hospital of Northern BC (UHNBC) will be the primary COVID hospital to treat patients.

Smaller hospitals, such as McBride and District Hospital, would likely serve as overflow sites, should the resources of UHNBC reach over-capacity.

The Northern Health authority is also planning for inter-facility transfer protocols between hospitals within northern health, and, “where we could, if required, move patients down to the lower mainland if we needed to.” said Brown.

Although very few young children worldwide have been affected by the novel coronavirus, any children in B.C. needing care related to the virus infection, would be treated at the BC Children’s Hospital in Vancouver.

The modelling also compared B.C.s place on the infection trajectory to other jurisdictions like South Korea; Hubei, China; Northern Italy; and the United States.

“It’s a basis for allowing us to look at scenarios that might happen and get ourselves organized, so that we know what we can do,” said Henry. “I think it was Roosevelt who said, you know, I find plans are useless, but planning is invaluable. And that is what we are doing right now, is the planning part.

Calling the modelling ‘a basis for change,’ Henry said the team has incorporated into its planning, the best and worst of what other nations were doing.

One of the countries the modelling specifically tracked B.C. progress against was Northern Italy, which served as a worst-case scenario for planning purposes.

“You’re seeing it daily on TV. And people are worried what would happen if that happened to us?” said Brown. “Because it’s a reference point, and people are anxious, that’s why we’ve used the scenario … (but) we’re absolutely just not even close to tracking against that.”

While Italy announced its first confirmed case around the same time as B.C., the differences between the two national experiences since then are profound.

“They have not been able to take a number of steps that we’ve taken,” said Brown, including the dramatic public health orders implemented by Henry, and the emptying of hospital beds over the past couple weeks, to prepare for incoming COVID-19 positive patients.

So far, B.C. has freed up 3,903 beds. Typically, at this time of year, the province’s hospitals are overfull, running at 103 per cent capacity.

Because the virus attacks the respiratory system, many other nations have suffered extreme ventilator shortfalls under the crush of an outbreak. The province has been amassing an inventory for many weeks now, and currently has about 1,344 ventilators in stock to prepare for any spike in demand. There are also a number of mobile ventilators located in first responder units throughout the province.

“We’re trying to learn” from the experiences of other jurisdictions, said Brown, who emphasized, it was “an abundance of caution” that motivated their planning for worst case scenarios.

“What would we do,” he asked. “And how would we cope, if we were to experience that situation?”

Based on the modelling, B.C.’s efforts are tracking more closely to South Korea, in terms of testing methodology and the trajectory of the rate of infections. Which is good news.

While South Korea suffered an explosion of positive cases, it is now seen as a source of hope since the country wrestled its pandemic under control, especially since it did so without some of the draconian measures employed by authoritarian regimes. Experts credit South Korea’s testing approach, as well as its strict quarantine of outbreaks, among other things, for its success.

The similarities in testing strategy with South Korea give Henry confidence, she said, that other modelling numbers are also comparable. Which, bottom line, indicates the work of Henry and her colleagues, and the efforts of British Columbians to follow public health orders, are showing an effect.

The work is far from over. No one will say when the public health orders might be lifted. But the modelling offers a glimmer of encouragement.

“We know that our outbreak will be different, it’ll be ours, and it will be unique from all of these (other countries),” said Henry. “But this (planning) gives us some way to focus the attention to understand where we might be, and to get people thinking about how are we going to do this and putting in place the things we need to be able to do it.”