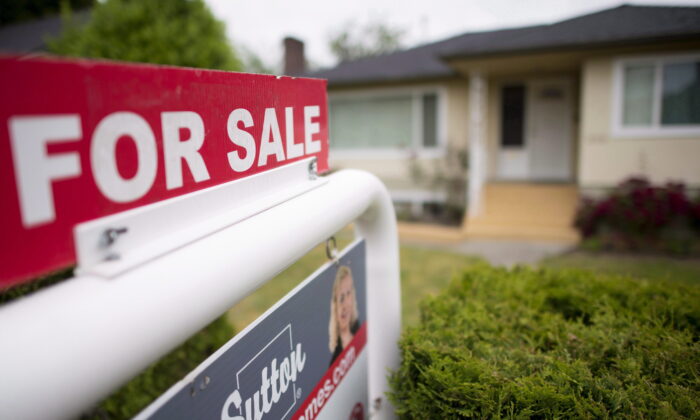 A real estate sign is pictured in Vancouver, B.C., on June, 12, 2018. (The Canadian Press/Jonathan Hayward)
Canada

BC Home Sales to Continue to Decline Into Next Year Due to High Mortgage Rates: Report

The trend of declining home sales in British Columbia, which are already below normal, is forecast to continue into next year as rapidly rising mortgage rates weigh on buyers, says the B.C. Real Estate Association (BCREA).

Home sales are anticipated to fall a further five percent to 77,790 units in 2023, according to the forecast.

“Mortgage rates have risen at a much faster rate and to a higher level than previously anticipated,” said Brendon Ogmundson, BCREA’s chief economist in a statement.

“Faced with a dramatic shift in the cost of borrowing, housing market activity is likely to fall well below normal over the next year.”

Weaker sales and rising inventory mean that some regions, mainly in more expensive markets, have tipped into buyers’ market territory, the association said, which resulted in average home prices falling in the province.

In Greater Vancouver, it anticipates that the average home price will increase 3.1 percent to $1.225 million this year and subsequently fall 2.9 percent to $1.19 million in 2023.

“While the year started with home sales on pace to exceed 100,000 unit sales for a second consecutive year, aggressive monetary tightening in response to the highest inflation in decades quickly sent demand to the sidelines as five-year mortgage rates more than doubled,” BCREA said.

“Compounding the impact of rising mortgage rates, mortgage stress test requirements mean many potential buyers have to qualify at more than 7 percent.”

The association added that both fixed and variable mortgage rates are expected to stay elevated over the next year with the Bank of Canada appearing “firm in its intent to lower inflation.”

“As a result, home sales will finish 2022 much weaker than last year’s record-breaking totals and that weakness will likely carry into 2023.”

The forecast said while the province’s housing market has to grapple with higher interest rates for now, the situation will be short-lived.

“The downturn is unlikely to be long-lived as BC’s strong population growth combined with extremely favourable demographics means there will be no shortage of demand for housing in the province,” it said.