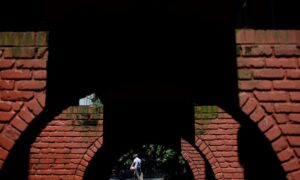 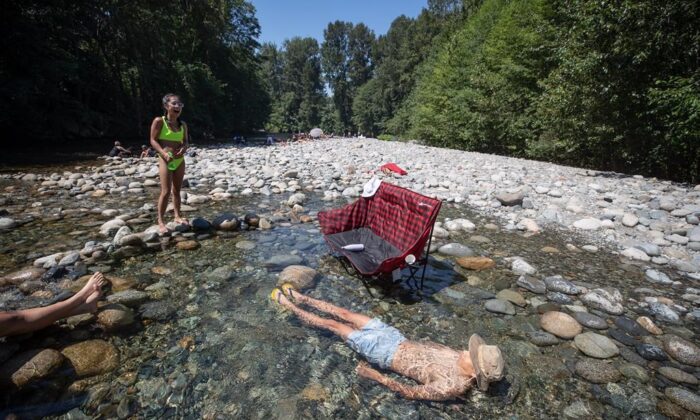 A man cools off in the frigid water of Lynn Creek in North Vancouver on June 28, 2021. (The Canadian Press/Darryl Dyck)
Canada

As the intense heat wave in the western provinces eases its grip, a former Environment Canada research scientist says that this weather event, while unusual, was caused by natural climate variability and is comparable to heat waves that occurred in the 1920s and 30s.

“This heat wave was exceptional, but it does not indicate any serious climate change issue,” Madhav Khandekar, an extreme weather expert, told The Epoch Times. “I think it is part of natural climate variability that we Canadians seem to forget.”

At the height of the heat wave, the village of Lytton in B.C. set a Canadian record of 49.6 degrees Celsius on June 29. On July 2, B.C.’s chief coroner Lisa Lapointe said 719 sudden and unexpected deaths have been reported over a seven-day period, noting that the severe weather was a significant contributing factor.

Seattle, Portland, and some other U.S. cities also broke heat records, with temperatures in some places reaching above 46 Celsius.

While some environmentalists and climate scientists claim that human-caused climate change is behind such extreme weather events, Khandekar doesn’t agree.

“Are these due to global warming or what’s called human CO2 emissions? The answer is no,” he said.

“For example, during the 1930s, often known as the ‘dust bowl’ years of North America, there were serious heat waves, and the highest temperature in Canada was recorded in a small town in Saskatchewan in July 1937: the temperature of 45 degrees [Celsius],” he said.

“In July 1936, for about 10 days, Toronto, where I live right now, recorded the highest temperature of 41 degrees Celsius without any humidity correction for three days in a row. That produced the deadliest heat wave in Canada, where over 1,100 people died, unfortunately, mostly because of dehydration and lack of air conditioning.”

He also said Canada and other parts of the world regularly experience extreme cold temperatures as well, such as in the winter of 2018 when an “extreme cold warning” was issued for most of New Brunswick. He questions why some seize on extreme high-temperature events as proof of global warming but ignore the extreme cold events, which he says are all part of natural climate variations.

Khandekar said that there is no direct relationship between CO2 emissions and change in climate, and that climate is mainly governed by solar variability.

“It is important to know that, soon after World War II, human CO2 emissions started to rise worldwide because of a lot of industrial activity after the war. Interestingly, there was a global cooling from about 1947 to almost about 1977–79 … of the global mean temperature by almost about one-quarter of a degree,” he said.

In a 2013 research paper titled “Are Extreme Weather Events on the Rise?” Khandekar presented his findings that the global mean temperature did indeed rise after 1977 until it reached its “maximum in 1998 and remained more or less stationary thereafter.” However, in 2002 it started to drop again.

“During January–February 2012, temperatures plunging locally in eastern and central Europe to -40 degrees celsius, [led]to several hundred deaths in Eastern Europe. The severity of winter 2002–03 was felt as far south as in Vietnam & Bangladesh, where several hundred people died of long exposure to cold weather,” the paper said, adding that significantly colder and snowier winters were also observed in North America in 2002–03, 2007–08, and 2009–10.

Many regions in South America also witnessed colder winters between 2008 and 2013, the paper noted. For example, some locations in Argentina recorded temperatures as low as -25 Celsius, with snow falling in Buenos Aires in July 2007—the first time the city had seen snow since 1918.

Khandekar said the mean temperature patterns over South America and Australia today are getting much colder than normal, with frost and snow occurring in southern Brazil.

Around June 28, countries such as Argentina, Uruguay, Paraguay, Bolivia, and Brazil were reported to be suffering “extreme and unprecedented cold weather outbreaks, with historic snowfall across some regions,” according to the online resource Severe Weather Europe. “A large region of the continent was experiencing temperatures over 15 °C colder than normal.”

In contrast to global warming, Khandekar believes the sun is going to enter the “solar grand minimum” in the near future, which means “we are heading for a colder climate in the next 10 to 20 years.”

He adds that it is important for Canadians to have access to global mean temperature data in order to understand the full picture of climate issues.

“If more Canadians see these mean temperature trends, then they will understand that climate change is very complex. CO2 concentration may increase, but that is not leading to warming, constant warming, of the Earth’s climate.”