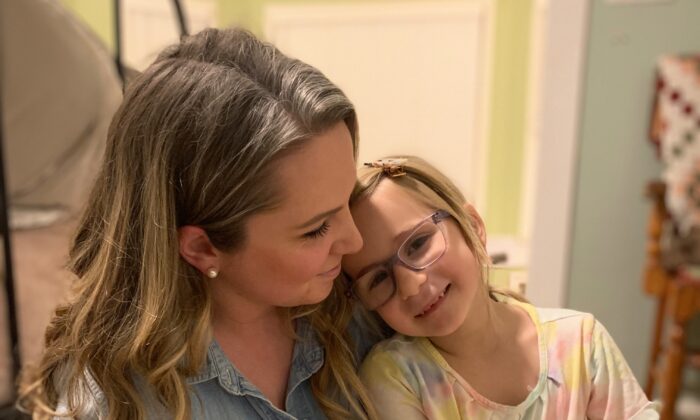 Laura Ziemer and her daughter, who was denied an appointment with her eye doctor at West Coast Vision for being unvaccinated. (Handout)
Canada

An ophthalmologist in British Columbia refused to treat two young children with serious eye conditions because they hadn’t been vaccinated for COVID-19, a decision that appears to go against the position of the province’s college of physicians.

Two B.C. mothers—Laura Ziemer and Sandra Scrimes—said they were devastated on Jan. 13 when the office of Dr. Ross Kennedy asked to see their children’s vaccination status just days before their appointments that had been booked months before.

“In light of the rising Omicron cases, we are only able to see vaccinated patients in clinic during this time,” read an email from West Coast Vision in Surrey, B.C., that Ziemer shared with The Epoch Times.

Both mothers said they were left scrambling to find new ophthalmologists for their children, as Scrimes said it was critical for her son to see a specialist because he was losing his vision. They say their goal now is to shed light on the incident to protect other families and warn other doctors considering similar vaccine policies.

A statement by the College of Physicians and Surgeons of British Columbia (CPSBC) issued last summer says it’s considered “indefensible from an ethical point of view” for a physician to require proof of vaccination prior to attending their office.

The CPSBC, which regulates individual doctors in the province, told The Epoch Times that this policy remains intact, and patients who have concerns about being denied care due to their vaccination status, should contact the college directly to file a formal complaint.

“Physicians cannot refuse to provide care to unvaccinated patients and must make accommodations in their office to ensure patients who need to be seen in person are,” a spokesperson wrote in an email.

Ziemer says she filed a formal complaint with the college against Dr. Kennedy and recently read on social media that his office has removed its proof of vaccination policy.

Repeated inquiries to West Coast Vision to address both the mothers’ concerns and to confirm whether its vaccine policy has been lifted remained unanswered as of publication time.

Ziemer and Scrimes, who both live in Chilliwack, an hour away from the clinic, say the ordeal added major stress on their families because of long delays in getting appointments with ophthalmologists in B.C.

Scrimes says the appointment was critical for her nine-year-old son. He has a condition called optic nerve hypoplasia, which has left him legally blind in his right eye, while his left eye is at risk to further vision loss.

“I was shocked,” she said. “I thought it was ridiculous considering that I made the appointment in November when I first realized that my son was losing his vision in his left eye and he needed to see a specialist right away.”

Scrimes said she contacted West Coast Vision citing the Charter of Rights and Freedoms. She said she told them that if the situation didn’t get resolved she would pursue further action.

The office called her within an hour and said that they could register her son with a different doctor, Scrimes said.

Ziemer’s six-year-old daughter was born with a condition called pediatric strabismus, which occurs when the eyes don’t line up. She underwent her first surgery at two years old after getting glasses at 10 months old.

“I was gutted and disappointed to receive a phone call and email earlier today regarding the decision to only see double vaccinated individuals,” Ziemer said in an email in a response to West Coast Vision’s vaccination policy.

Ziemer added that her daughter’s health was her priority and she wasn’t sure how to proceed.

Dr. Kennedy responded to Ziemer in an email, “Covid has introduced massive stress in the medical system and the lives of many people,” but that the  “deferral of the office visit represents a reasonable compromise.”

Dr. Kennedy added that his office would return to normal visitation when the Omicron wave passes and that he would support Ziemer to find another doctor. Despite the offer, both Ziemer and Scrimes said they had to sign their children up on their own with an ophthalmologist at the same office.

However, they’re concerned because their new doctor is pregnant and will have to go on maternity leave by the summer, leaving them to search for a new physician yet again.

For Ziemer, the whole issue could have been avoided if Dr. Kennedy provided patients COVID-19 rapid tests.

“It’s really, really upsetting to see our medical system start fraying at its ends when kids are turned away from their doctor because of their vaccination status,” Ziemer said.

While Ziemer says her priority is her daughter’s health, she questioned the validity of the vaccine policy because of how highly transmissible the Omicron strain is.

A recent British study showed that two doses of either Pfizer or AstraZeneca COVID-19 vaccines were zero to 20 percent effective in preventing infection against Omicron. The research also suggests that natural immunity from a prior infection provided a 19 percent protection against an Omicron infection.

Ziemer said that her entire family had already recovered from COVID-19 and thought it wasn’t right that Dr. Kennedy never considered natural immunity.

Both Ziemer and Scrimes said they aren’t the type to raise concerns publicly, but in this case they felt it was their moral duty to do so.

“If I can make a difference for just a couple of other kids, it makes me very happy because I don’t want to see any kids struggle to get the care that they need,” Scrimes said.