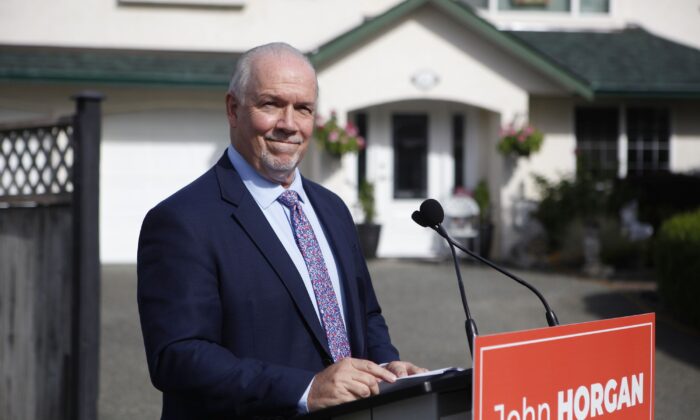 As the British Columbia election enters its second week, the B.C. Liberal Party has pledged to eliminate the 7 percent provincial sales tax for one year and place it at 3 percent the year following in a bid to regain power from John Horgan’s NDP.

The reprieve will leave nearly $6.9 billion more in taxpayers’ pockets in the first year and over $3.9 billion in the second year. A family of four with each parent earning $60,000 would save $1,714 and $979 in these years, respectively.

“Every government in the Western world is anticipating deficit spending for the next few years,” Liberal Leader Andrew Wilkinson told a news conference on Sept. 28. “That’s the fact of the matter, to pay for health and education, to maintain the services we want, to build all the projects that are already underway.

Kris Sims, the Canadian Taxpayers Federation spokesperson for B.C., called the news “a bit of a tone change” for the Liberals.

“This is a really bold move,” Sims said in an interview. “This now puts the ball in John Horgan’s court. John Horgan grew up a working person. He drove trucks, he worked in pulp mills. A lot of his original support comes from working-class people.”

A September 24 poll by Insights West found that 58 percent of B.C. residents disapproved of the election call, given the pandemic. However, just 35 percent of NDP voters disapproved, compared to 77 percent of Liberal voters and 73 percent of Green voters.

Insights West also found that the pandemic was the number one issue for voters and that the NDP leads in every demographic category including age, sex, and geographical region.

“There are limitations to what kind of risk people want to take,” said Paul Rowe, a political science professor at Trinity Western University in Abbotsford, B.C. “In the midst of a crisis, most people default to wanting to just keep the status quo.”

Rowe adds, however, that “the NDP could lose in the court of public opinion by an early election call and it could backfire on them.”

An Angus Reid poll released Aug. 31 showed that Horgan’s approval rating of 69 percent was highest among the Canadian premiers.

Wilfrid Greaves, a professor of international relations at the University of Victoria, says if he were to advise Horgan: “I would definitely be running on the record and I would be running on the pandemic, as I think he is. There’s a number of concrete achievements from the last three and a half years that the government can point to. In that sense, they’re looking to eat the Green Party’s lunch, so to speak.”

In 2017, Horgan reached an agreement with then-Green Party leader Andrew Weaver to take power. The 41 NDP MLAs and 3 Greens provided a one-seat majority in the 87-seat legislature. A health issue in Weaver’s family led him to step down in January 2020, and he left the caucus later that month to sit as an independent.

Furstenau became Green Party leader on Sept. 14. By Sept. 29, the Greens had only appointed 37 candidates. Greaves said the party has had a “high water mark” but is now “in a tough spot.”

“It’s very difficult in some ways to run against the party that you have been enabling and keeping in power for the last three years and cooperating very intimately with,” he said. “There are some initiatives that the Horgan government had undertaken that are not popular with environmentalists.”

One of those is the Site C dam project by BC Hydro, which was opposed by some First Nations leaders and environmental activists for the lands it would flood. Unforeseen engineering challenges have ballooned its expected costs to $12 billion, inspiring more recent calls for construction to be suspended.

Despite these challenges, Greaves expects an NDP win. “Absent something significant that’s going to upset the current trends in the race, the NDP are poised to actually have quite a significant electoral success.”

Sims says if NDP support slips radically, Horgan could scrap the carbon tax, a levy he opposed in 2008.