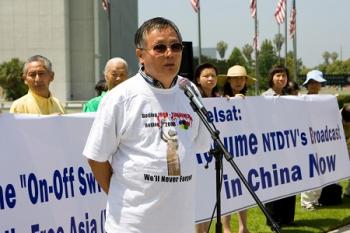 LOS ANGELES—Several non-governmental organizations, supporters and viewers of New Tang Dynasty TV (NTDTV) gathered in front of the Los Angeles Federal building on August 1. They demanded that the Broadcasting Board of Governors (BBG) continue its contract with Eutelsat (European Satellite Communication Company).

Chinese democracy activist Wei Jingsheng questioned BBG’s mission: Is it to serve the American taxpayers or the authoritarian Chinese government?

Wei mentioned that during his meeting with President Bush a few days ago, the President promised to deliver both human rights and democracy issues to Beijing. And yet, the BBG, a U.S. government agency is helping to blockade the information of human rights, democracy, and freedom of speech in China. He asked, “What’s going on?”

Wei said, “In the past, the Chinese government has failed to block these media from delivering the truth even though the Chinese Communist Party (CCP) has spent a fortune to organize both people and strategies. However, the BBG, being an agency sponsored by U.S. taxpayers’ money, is transferring all the truth telling media to a satellite controlled by the CCP. We’d like to ask: Who is the BBG serving with the taxpayers’ money, the Americans or the Chinese government?”

According to Wei, in 1998 when the BBG was criticized widely, during a meeting in New York, the Board Chairman guaranteed that the BBG would carry out its policy to protect freedom of speech.

Wei continued to criticize, “In particular, the agreement has been kept as a secret. Without prior notice, the transferring of the satellite was done. Without any effort, the CCP can now control the U.S. media and control the media that tell the truth. We have to ask: Is the BBG working for the freedom of media or for the censoring of media?”

“The day before yesterday, President Bush assured me in the White House that in his trip to Beijing, he will elaborate on the issues of human rights and democracy. But a U.S. federally sponsored agency is now helping the CCP to block human rights, democracy, and freedom of speech. What exactly is going on?” said Wei, adding the U.S. Congress is also demanding an answer from the White House and the federal agency.

Finally, Wei said, “All Americans should ask: What are you doing with our money?” “I am also hoping that the BBG will re-examine their decision. There is still time to correct the mistake!”