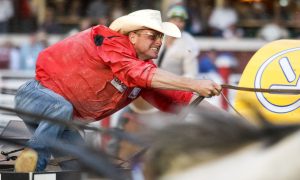 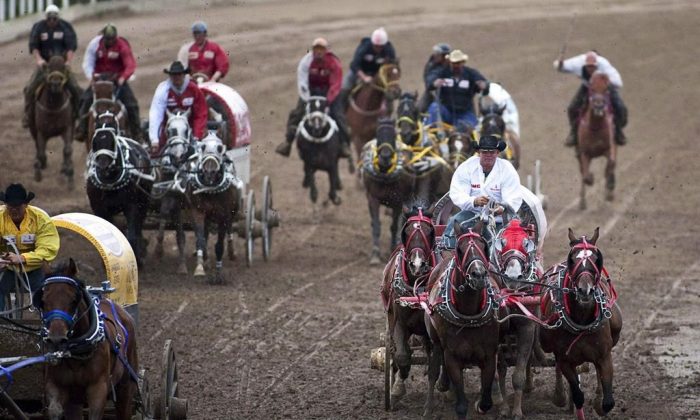 Teams compete in a chuckwagon race at the Calgary Stampede in Calgary on July 12, 2010. (Jeff McIntosh/The Canadian Press)
Canada

CALGARY—Canadian-born actress and animal rights activist Pamela Anderson has renewed her call for an end to chuckwagon races.

Anderson has sent a letter to Alberta Premier Jason Kenney and his agriculture minister urging them to stop the popular rodeo event.

“After recently moving back to my beautiful native Canada, my heart sank as I read about six horses who died in this year’s chuckwagon races at the Calgary Stampede. I urge you to direct the Stampede to ban these deadly races,” writes Anderson.

“Please use your authority to end chuckwagon racing before more horses die.”

The races are a nightly spectacle during the Stampede. Crowds watch as horse-drawn wagons accompanied by outriders thunder around a dirt track.

Anderson is an honorary director with People for the Ethical Treatment of Animals. About 20 of the group’s members gathered in front of the Alberta legislature last week to call for an end to the sport.

Anderson, best known as one of the swimsuit-clad lifeguards in “Baywatch” in the 1990s and as a model for Playboy, wrote a similar letter to another Alberta premier in 2012. She asked Alison Redford to use her influence to persuade Stampede organizers to “end these spectacles.”

Anderson said in that letter that she was ashamed the races were allowed to continue even as horses died.

The Calgary Stampede has said it will thoroughly review chuckwagon safety after the fatalities this year—the deadliest in nearly a decade.

“The Stampede’s commitment to the safety of animals and the conditions of their participation in our events is paramount to our values and brand integrity,” said a statement at the close of the rodeo earlier this month.

The Stampede tightened safety rules for the races in recent years, but Anderson says in her latest letter that it obviously wasn’t enough.

“More than a dozen horses have died since then, because these races are inherently cruel and dangerous,” she writes.

“This cruelty and indifference do not represent the Canada I know and love.”

The Agriculture Department said last week that it is confident the Stampede’s review of the latest horse deaths will address how best to bring in measures to improve safety and animal care.