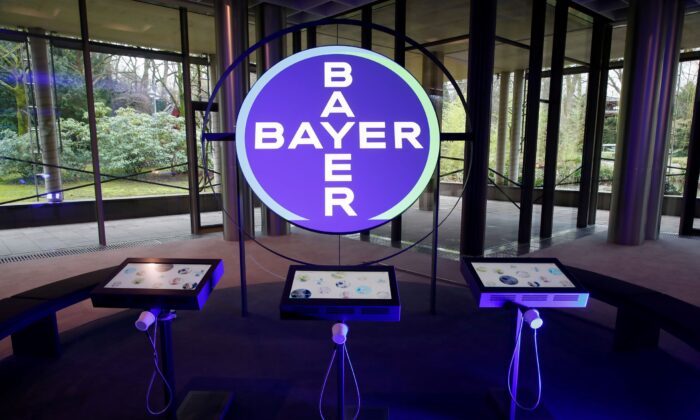 The logo of Bayer AG is seen in a showroom of the German drugmaker where the annual results news conference takes place in Leverkusen, Germany, on Feb. 27, 2020. (Wolfgang Rattay/Reuters)
Judiciary

Pharmaceutical manufacturer Bayer Corporation and its related entities are to pay $40 million to resolve two whistleblower lawsuits filed by a former employee.

The lawsuits were filed by Laurie Simpson who used to work in Bayer’s marketing department. They are related to false claims made by the company about three of its drugs: Trasylol, Avelox, and Baycol.

Simpson will receive roughly $11 million from the proceeds of the settlement, according to a Sept. 2 press release from the Department of Justice.

In one lawsuit, the company is alleged to have paid kickbacks to physicians and hospitals to entice them to use the company’s drugs Avelox and Trasylol. These drugs were also marketed for off-label uses that were “not reasonable or necessary,” the release said.

Bayer ended up submitting false claims to Medicaid and Medicare programs, violating the laws of 20 states as well as the District of Columbia.

Trasylol is a drug used to control bleeding during heart surgeries. It was removed from the U.S. market after a study showed the drug increased the risk of death compared to alternatives. Avelox is an antibiotic used to treat certain bacterial strains.

Regarding Baycol, the second lawsuit claims that Bayer knew about the drug’s risks of triggering rhabdomyolysis and yet downplayed the risks. Rhabdomyolysis involves the breakdown of muscle tissues which causes the release of muscle fibers into the blood.

The company is also alleged to have misrepresented the efficacy of Baycol and fraudulently induced the Defense Logistics Agency to renew contracts related to the drug.

Baycol is used to reduce the amount of LDL cholesterol and total cholesterol in the blood. It was withdrawn from the U.S. market in 2001.

The settlement was made under the whistleblower provisions of the False Claims Act, which imposes liability on entities or individuals who defraud governmental programs. It is the primary litigation tool used by the federal government to combat fraud against the administration.

The law includes a qui tam provision that allows private citizens to file a lawsuit on behalf of the government for false claims as well as get a share in any monetary recovery. Simpson’s $11 million payment comes under this provision.

U.S. Attorney Philip R. Sellinger for the District of New Jersey thanked Simpson and her counsel for coming forward and pursuing the case to conclusion. He criticized Bayer for indulging in a “series of unlawful acts.”

“This resolution should send a message to the pharmaceutical industry that such conduct undermines the integrity of federal health care programs and jeopardizes patient safety,” he said in the release.

“This settlement reflects the importance of the whistleblower’s role in litigating False Claims Act actions on behalf of the United States.”