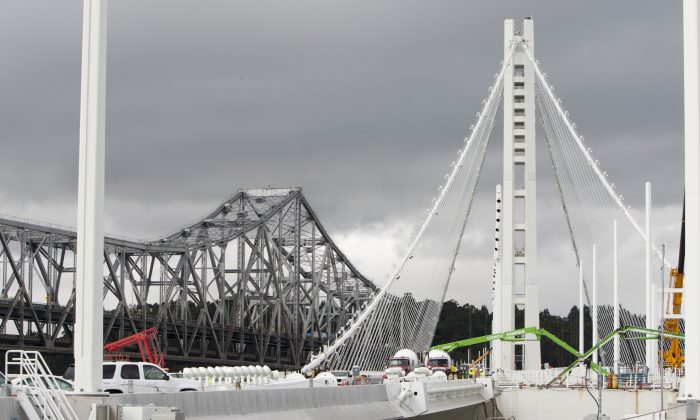 The new eastern span of the San Francisco–Oakland Bay Bridge under construction, with the old span in the background (L) in Oakland, Calif., Aug. 8, 2013. (Alex Ma/Epoch Times)
Northern California

Bay Bridge Bolts One Little Step Closer to a Fix

SAN FRANCISCO—After the big opening of the new eastern span of the Bay Bridge, originally scheduled for Labor Day, was pushed back by several months, mainly because of a bolt problem, there was disappointment all around. So there was a need for some good news.

On Thursday, the Bay Bridge Public Information Office invited media to an event to witness the “first pouring of the first layer of concrete” for a concrete base that will cover the bolt-fix. It’s not the actual fix yet—though it demonstrates progress.

The fix for the 32 broken bolts will be a reinforcing steel saddle that is still being manufactured. The saddle is meant to do the same job as the bolts should have done, securing critical seismic gear, called sheer keys, at crossbeams of the bridge.

“This is a unique fix for a unique problem,” said Andrew Gordon, Bay Bridge spokesperson.

The production of the saddle pieces at a steel plant in Vallejo comes at the extra cost of $20 million. The first pieces of the saddle are expected to arrive in early September when the actual retrofit work can start.

In March, it came to light that 32 out of 96 bolts at the eastern span had broken, putting the seismic integrity of the bridge into question.

More than three months later, on July 8, the Toll Bridge Program Oversight Committee decided that the long-scheduled opening day on Labor Day 2013 could not be met, since the fix will take more time.

According to the current construction schedule, the eastern span will not be completed before December 10.