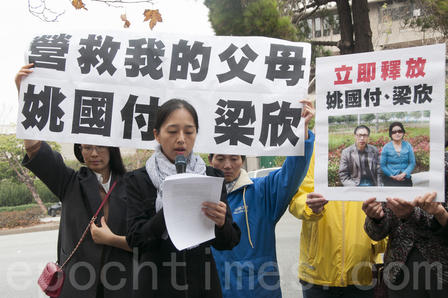 Yolanda Yao appeals for the release of her parents during a rally in front of the Chinese Consulate in San Francisco on Dec. 9, 2015 (Epoch Times)
China

These words are often uttered after an atrocity beyond humanity’s comprehension has taken place. Taken as a motto by many Americans after the unspeakable evils of Nazi Germany in WWII were revealed and as a rallying cry after the horrific events of 9/11, still the primal outrage that ignite such statements soon fade and we find ourselves inexplicably uttering those bitter words yet again.

And yet again the situation is before us. Have we learned from history’s lesson?

Thirty-one-year-old Bay Area resident, Yolanda Yao, was like any other college student, pursuing a Ph.D. in Environmental Studies at Beijing Normal University until the afternoon of Oct. 23, 2011 when all sense of a normalcy was irreparably taken and with it long held hopes and dreams extinguished.

That day, according to Ms. Yao, she and three other college friends were having lunch in the apartment of one of the friends when they were besieged by police and taken to the Beijing Changping District Dongxiaokou police station where she faced over 12 hours of unrelenting interrogation. When she wouldn’t renounce her beliefs she was transferred to the Beijing Changping District detention center and locked in a cell with 20 other prisoners.

Ms. Yolanda Yao practices a gentle mind-body meditation system called Falun Gong. Falun Gong involves four slow moving exercises and a meditation practice and living according to the universal principles of truthfulness, compassion, and tolerance. Falun Gong is practiced peacefully everywhere around the world by over 100 million people who have experienced innumerable health benefits and elevation in moral character.

Everywhere that is except for China.

In China, Falun Gong is persecuted by the authorities, and the simple act of meditating in a park or at home can become a life or death choice. In 1999 the then-paramount leader Jiang Zemin began brutally suppressing the practice, a suppression that continues to this day. Millions of families have been torn apart, and there has been untold loss of life and property and unimaginable suffering.

Recalling her days of detention, Ms. Yao had these words: “a living hell.”

“Looking back at the darkest 20 months in my life, over 600 days and nights might not seem too long, however to a person who suffered constant physical and mental torture, it felt like it was never going to end.”

At night she slept on a cold wooden floor, huddled together for warmth in the crowded cell and monitored around the clock by other prisoners, waking up to excruciating back pain. Meals consisted of spoiled cabbage mixed with mud and sand and only one cup of water a day. This continued for a month until she was transferred to Beijing Women’s Labor Camp.

Conditions at the labor camp were significantly worse. Ms. Yao describes the desperation she felt “like crawling in a freezing dark night without ever seeing any light.”

It felt like it was never going to end.
— Yolanda Yao

“The policemen at the labor camp used all means necessary to force Falun Gong practitioners to give up the practice. They forced us to sit on a child’s chair for over ten hours every day. This caused legs and feet to swell, and at the end our back and hip would bruise, and even worse, they would ulcerate.” The use of toilets was also severely restricted leading to incontinence, urinary tract infections, and in severe cases ruptures.

According to Ms. Yao, she was forced to do heavy labor in summer temperatures surpassing 100 degrees Fahrenheit and in winter when temperatures in Beijing are well below freezing outside. Sleep deprivation is widely used on Falun Gong practitioners held prisoner, and Ms. Yao was no exception, often getting only 3 hours of sleep each night before the grueling physical labor began.

“The guards forced us to use a rickshaw to pull excrement. There are many dunghill maggots, liquid excrement flowed everywhere and exuded stench.” Due to the high temperature, dehydration and forced labor, Ms. Yao was on the brink of passing out many times. On one occasion Ms. Yao was soaked in pesticides when the 70-pound barrel she was carrying leaked.

Inside the walls life consisted of cleaning the filthy latrines, showers in cold water even in winter, or going weeks without bathing. Around the clock brainwashing sessions were the norm as prisoners were forced to watch propaganda videos slandering the practice and its founder and coerced to sign guarantees that they would stop practicing Falun Gong or face additional tortures.

The CCP’s campaign of propaganda and lies against Falun Gong has extended outside its borders, infiltrating even democratic countries with many people being unable to discern the truth from lies.

Many Falun Gong practitioners protested the inhumane treatment by going on hunger strike only to be sent to labor camps hospitals to be forcibly feed through the nose. This along with numerous torture practices including beatings with electric batons, being submerged in sewer water while locked in a tiny metal cage, or gang rape has led to 3925 documented deaths.

Because of the difficulty of getting information out of China, the deaths from torture and abuse are believed to be much higher. In addition, researchers estimate that the unimaginable act of harvesting organs from still living practitioners for use in transplantation has killed tens, if not hundreds, of thousands.

It was pressure from international human rights organizations that saved Ms. Yao’s life. Pressure from abroad eventually toppled the infamous labor camp system in Mainland China in 2013, ending Ms. Yao’s detention and decades of bloody state-sanctioned torment in the form of “re-education through labor.”

Now Ms. Yao’s nightmare has resurfaced. This time it’s her parents, Guofu Yao and Xin Liang, that face an uncertain future. The pair have not been seen since they were taken by force from their home on Dec. 5, 2015 by a group, according to eye witnesses, of more than 30 plainclothes police.

“My heart was broken into pieces,” Ms. Yao remembers when hearing news of her parents’ arrest. Flashbacks of her own detention and her parents’ fate now haunt her waking hours, “my elderly parents will now suffer the same torture. [Memories] of the suffering has once again shrouded me in dark shadows.”

Ms. Yao hopes the good citizens of the world can hear her plea:

“I urge the U.S. government and the people of the U.S. to bring attention to this brutal persecution happening in China right now. You can help stop this persecution through writing emails, letters or calling your local government officials urging them to take action, or speaking out on the internet and social media.”

This choice has played out countless times, across many nations, in all walks of life over the centuries. When good people and fundamental human rights that serve as the foundation of any just society are attacked, what do we do?

Our conscience calls us to act.

People are being persecuted for wanting to live their lives by truthfulness, compassion, and tolerance. Tens of millions of people are suffering in China. Genocide is taking place there right now.

How You Can Help: