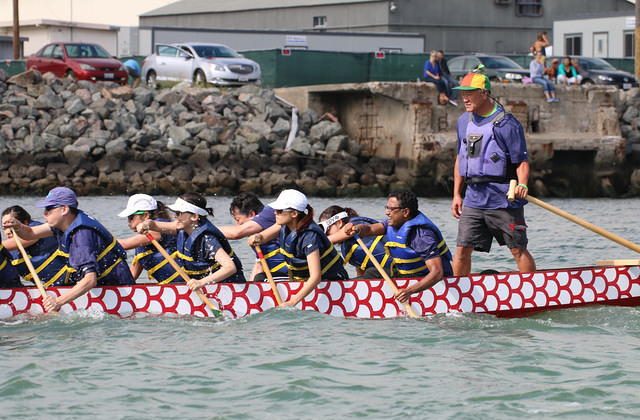 Norm Gok steers at the annual San Francisco International Dragon Boat Festival on Treasure Island in 2014. “It’s much more than just an individual thing. Dragon boating is a real team sport. Everybody has to function together,” Gok said. (Courtesy of Jeremy Wong)
Northern California

SAN FRANCISCO— The dragon boat team Bay Area Dragons (BAD) has reached its goal of the season: qualification for the World Club Crew Championships in Adelaide, Australia, in 2016.

BAD was founded in 1995 by Alvin Wang, who brought the sport from Calgary, Canada, to the Bay Area. BAD is a nonprofit organization with some 100 members.

“It’s a very social sport. It is really a matter of making everybody work together as a team,” said Karger, who is also an experienced coach and steersperson. Karger works as a senior staff scientist for a company in South San Francisco.

Karger lives in Foster City and saw dragon boats in front of his house on a daily basis. The annual dragon boat competitions held in front of the local community center made him decide to try it out in 2003.

“It looked like a lot of fun. I just cannot see me exercising by myself and have that much fun,” he said.

Only one club team from each division is selected for the World Club Crew Championships, which are held every even-numbered year. The world championships for national teams are held in odd-numbered years.

BAD will represent the U.S. West Coast in the Senior B division, which is for people 50 years old and above. Many teams, from Los Angeles to Portland and Seattle, participated in the qualification in August.

BAD qualified for and participated in the championships in Italy in 2002 and Malaysia in 2008.

Karger said the outcome of a race is determined by timing, teamwork, mental strength, and technique.

“It looks trivial from the shore, but it is really something that needs a lot of individual work, something we work on here every day: technique—basically your style and how smooth your individual stroke is,” he said.

“You know that long boat that has a dragon head and a tail?” Deanna La Torre says when asked what she does. “Well, that’s what I am doing.”

La Torre has been paddling for seven years with a team called Live, Love, Survive, formerly called Paddle Past Cancer, which was founded in 2005 by Jenn Eng to raise awareness about cancer survivors. BAD provides paddles, life jackets, and one of the 48-foot-long, 700-pound fiber boats for the team’s weekly practice, with Karger as the coach.

As a caretaker of her mother, who died from breast cancer, La Torre competes on the team. She said she likes “the camaraderie with the whole team, and seeing these wonderful women who have survived and who have gone through hell and come back out, living life at the fullest. It’s inspirational.”

“You don’t have to be a survivor. You can just come out and join the team,” La Torre added.

Chang said they always strive to improve. “It’s what I call trying to get to the perfect race,” he said.

When asked whether he had ever experienced the perfect race, Chang said, “Very close.” It was at a race in Vancouver, Canada, in 2001.

“The teams in Canada are much more competitive, much better organized than they are here in the States. Each team has three or four teams in different categories,” Chang said.

Dragon boating became known in Canada as early as 1945.

“We had the nearly perfect race, basically where everyone was paddling all in time. We were able to get the boat ‘out of the water’ and just ‘sail,’ and our times were one of the fastest times of the day for our division, and it was just an amazing race where it was almost effortless,” Chang recalled. “We actually won our division by almost a boat length, which theoretically is very, very difficult to do.”

By means of initial acceleration, a team tries to lift the boat up a bit to reduce the water resistance, which is called getting the boat “out of the water.”

Chang said dragon boating is “not really about pure power; it’s more about working together.” He calls this “the beauty of dragon boating.”

“It’s the ultimate team sport, where the more synchronized you are and the more selfless you are, the better off you do,” he said.

At the championships in Rome in 2002, a teammate suggested to Chang that he come up with a carbon fiber dragon boat paddle. Chang had a background in engineering and bicycle manufacturing, and thus he started his company Burnwater, which produces super-light paddles for distributors in various countries worldwide and individual paddlers at local and international races.

“As a steersperson, it’s a huge responsibility,” said Norm Gok, who started dragon boating in 1997. “Not only do you have to keep your own balance on the boat, but you also have to pay attention to your surroundings—traffic around you.”

The rules on the water are mandated by California state law, and the California Dragon Boat Association (CDBA) offers a program to teach people how to steer. Races on the Bay, such as the annual San Francisco International Dragon Boat Festival on Treasure Island, require an official steering certificate.

“If a boat is coming towards you, and you are on a collision course, your job as a steersperson is to make sure your boat is safe,” Gok said. “Even if it means losing the race.” He said losing is better than having the boat flipped over and people in the water.

Gok started out as a novice paddler at corporate team events. He liked it so much that he and his wife eventually started to do it more and more frequently.

“We then joined the Bay Area Dragons. Now we’re on the water several times a week,” he said.

Together with Karger, Gok is on the winning BAD team that qualified for Australia. Besides being a steersperson, he is also a very experienced coach.

“I am at the stage where I want to pass along that knowledge to other people: my skills, what to do to improve as an individual, as a group, as a team; what people need to think about as a paddler,” Gok said.

The 20th annual San Francisco International Dragon Boat Festival, open to the public, will be held on Treasure Island on Sept. 19–20, with some 120 teams and 3,000 paddlers participating.