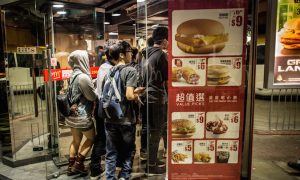 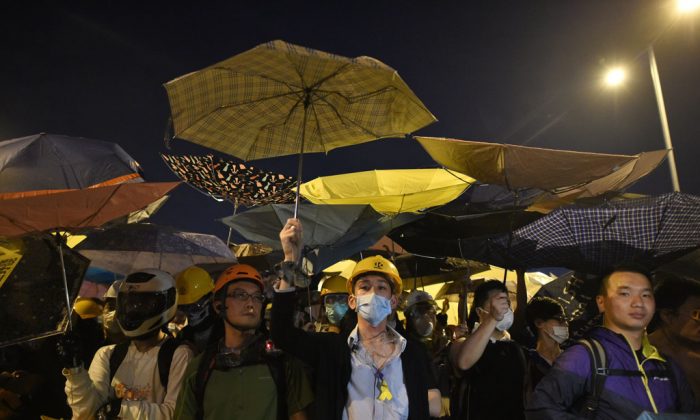 Demonstrators hold umbrellas, a symbol of the pro-democracy protests, amid a clash with police during the protest near the government headquarters in Hong Kong on Nov. 30, 2014. Protesters want free elections in 2017 for Hong Kong's leader, whom Beijing says must be vetted through a loyalist committee. (Philippe Lopez/AFP/Getty Images)
China

Battle Over Road Ends in Arrests, Clearance in Hong Kong

A night of back-and-forth occupation and seizure of a key artery in Hong Kong ended with an early morning police raid on Dec. 1, ejecting the last group of tired and bedraggled protesters from Lung Wo Road, the main road outside the headquarters of the government and the office of the chief executive.

Police, screaming and pointing, their batons flying, then pushed protesters back to their main encampment on Harcourt Road, which they have occupied for the last two months. In an apparent act of minor reprisal, the police also took the opportunity to snip away some of the pro-democracy banners that have hung on one of the sky bridges overlooking the occupied zone.

Police removing a protest banner, a simple provocation without an operational value. https://t.co/fhXaASms1j

By that time, nearly 11 hours had passed since protesters first took Lung Wo Road—those that remained put up little fight.

Over 40 arrests had been made by the morning, and a stream of photographs uploaded to social media showed protesters with lacerations and deep bruises on their backs and limbs, caused by police batons. Others were soaked with pepper spray, delivered by pump action hoses operated by police.

The events began at around 8:30 p.m. on Nov. 30, with thousands streaming onto the road in an almost spontaneous rush. Just as they did two weeks ago when they seized the same road, they ran through the tunnel next to government headquarters, and set up makeshift roadblocks.

That first occupation was tolerated by police—for a time.

0345 what happens when u take away their metal barricades? They uproot streetside barriers and bricks. #OccupyHK pic.twitter.com/OI4CopeFQw

The protesters had flooded onto the road in their hard hats, gas masks, and goggles, chanting pro-democracy slogans.

Their goal was to hold the road overnight, to stop Chief Executive Leung Chun-ying and the civil service from coming to work in the morning. That part of the plan appeared to be a success, with the government telling public servants that they didn’t need to come to work in the morning, according to Radio Television Hong Kong. It seemed that they were to start in the afternoon, instead.

Police attempted at one point to clear the road, but were driven back by the mass of occupiers, some of whom tossed water bottles and held their ground with opened umbrellas, a symbol of the movement.

“We will open up this road,” Police Senior Superintendent Tsui Wai-hung told reporters, according to The Associated Press.