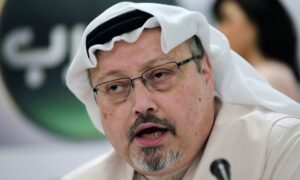 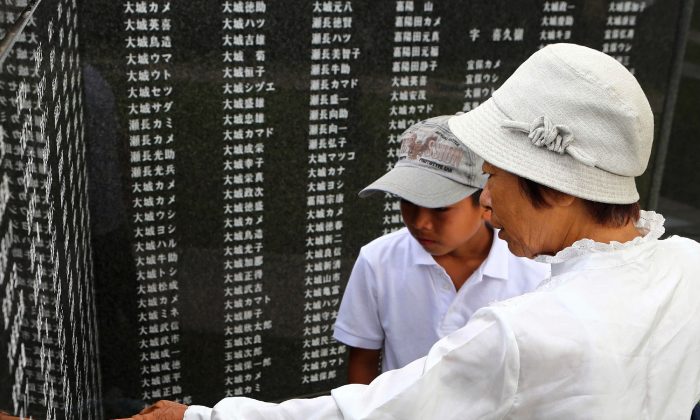 Relatives look at names on a Battle of Okinawa stone monument at Peace Memorial Park in Itoman on the island of Okinawa, Japan, on June 23, 2014. (JIJI PRESS/AFP/Getty Images)
Opinion

Battle Of Okinawa’s Legacy Lives on 70 Years Later as Locals Chafe Against Japanese Rule, US Arms

April 1 marked the 70th anniversary of the beginning of the Battle of Okinawa, a prolonged and bloody encounter at the end of World War II.

As military history, the battle is often told in numbers.

More than 100,000 Japanese soldiers were killed alongside approximately 12,000 Allied troops and as many as 150,000 Okinawan civilians. These numbers don’t include the masses of wounded or captured prisoners of war.

It was an unquestionably vicious, intimate battle that unfolded over nearly six weeks, helped bring about the end of World War II, and left Naha and other population centers across Okinawa in ruin.

Yet the numbers give an incomplete picture of the battle’s significance, particularly its cultural and social ramifications for Okinawa, Japan, and the United States since 1945.

The legacy and consequences of this battle persist today, evident in the strained relationships between Okinawans and the Japanese government and the lingering tensions that periodically burst into open conflict over the continued American military presence in Okinawa.

Even in my own work with alcoholism in Tokyo, a topic much removed from the memories of historical turmoil, Okinawa’s unusual position in contemporary Japan is not unnoticed.

A Center for Commerce, Culture, Conflict

Okinawa, a chain of a few dozen islands on Japan’s southernmost edge, is home to about 1.3 million people, whose longevity is among the highest in the world. It’s known for its coral reefs, ancient forests, and white sand beaches.

The prefecture sweeps down from southern Japan toward Taiwan, marking one edge of the East China Sea, casting it at the center of commerce, culture, and conflict for millennia. At differing points in history, it was the independent Ryukyu Kingdom as well as a tributary state to various Chinese emperors and Japanese shogunates.

Japan annexed Okinawa through a military incursion in 1872 and gave it the status of prefecture in 1879, but this did little to dissolve rising tensions between Okinawans and Japan’s central government. These tensions were unresolved as World War II, which put Okinawa once again at the center of a bloody conflict, drew to a close. Today that history is remembered and retold in markedly differing ways.

In the Japanese government’s historical account of the battle, little mention is made of the coercion by retreating Japanese soldiers of Okinawan civilians to commit suicide, in some instances by detonating hand grenades. As evidence of the contentious nature of these accounts, Nobel laureate Kenzaburo Oe was made to stand trial for claims made in his book “Okinawa Notes” concerning these suicides forced by Japanese soldiers before the arrival of the Americans. His claims were found to be accurate.

Simmering Anger Over US Military Presence

It is not just Japan’s central government and its role in Okinawa’s recent past that generates anger among Okinawans.

From 1945 until 1972, the U.S. government administered Okinawa, 20 years beyond the Allied occupation of Japan after World War II, using the islands as a staging area for the Vietnam War.

This American military presence aroused widespread anger among Okinawans. U.S. military bases occupy about 18 percent of Okinawa’s main island. Marine Corps Air Station Futenma, the primary runway for aircraft moving in and out of Okinawa, is today surrounded by local homes and businesses in a part of Japan where land is at a premium.

More than 85 percent of Okinawans say they oppose the U.S. military presence for reasons ranging from noise pollution to tensions between local residents and soldiers. Several high profile incidents, particularly the 2008 rape of a 14-year-old girl by a U.S. Marine, have only deepened this divide.

Anger has again flared recently over U.S. military plans to expand its base. Takeshi Onaga, Okinawa’s governor, has ordered a halt to construction of a runway at Camp Schwab Marine Corps Base that would jut out into picturesque Oura Bay. Local residents (in kayaks and rafts) are now locked in a constant standoff against Japan’s Coast Guard (in military ships), to preserve the bay and block any new construction. Prime Minister Abe asserts that Gov. Onaga does not have the authority to intervene. Okinawan anger continues to smolder.

Local Okinawan politicians are growing more vocal in their opposition to the American military presence. A Ryukyuan independence movement is discussing severing ties with Japan. The Ryukyuan family of languages has found resurgent popularity as a powerful contemporary marker of Okinawan identity, in part because it is distinct from Japanese.

Seventy years after one of World War II’s bloodiest battles, Okinawa’s future remains ambivalent and antagonistic on a variety of fronts.

Some clamor for independence, while others want to see the U.S. military presence removed or at least reduced. All the while tourists from the Japanese mainland visit in droves, driving a local economy that further complicates Okinawa’s status.

The Battle of Okinawa’s legacy is still very visible, long after the physical scars and markings of war have faded.

Paul Christensen is an assistant professor of anthropology at Rose-Hulman Institute of Technology. This article was previously published on TheConversation.com.