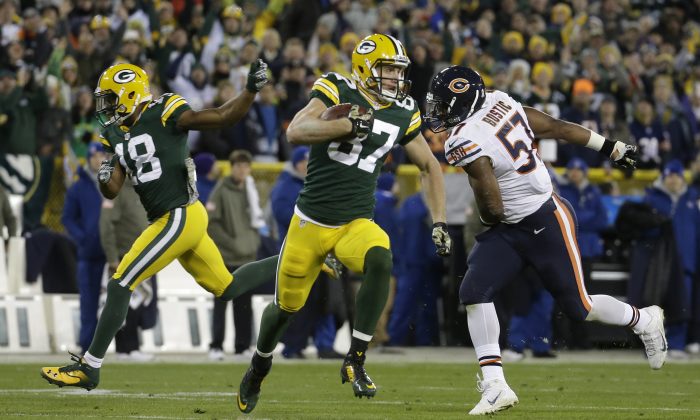 Green Bay Packers wide receiver Jordy Nelson (87) runs to the end zone for a touchdown after catching a pass from quarterback Aaron Rodgers during the first half of an NFL football game against the Chicago Bears Sunday, Nov. 9, 2014, in Green Bay, Wis. (AP Photo/Morry Gash)
Life & Tradition

An article saying Green Bay Packers receivers Randall Cobb and Jordy Nelson were caught with “battery powered gloves” and got a lifetime ban is fake.

The bogus article was posted on Empire News, a satirical website.

Empire News has a disclaimer, which says it’s fake.

The article had tens of thousands of shares and likes on Facebook as of Tuesday.

On Twitter and other social media sites, people apparently believed the bunk report.

“I like how adrian petterson wll be back next season prabably but two packer players who used battery powered gloves will be banned for life,” said one person on Twitter.

Said another, “If You Ain’t Cheating You Ain’t Tryin.”

Added another: “Sounds like hand warmers (on a freezing cold day) with batteries. Marching bands use stuff like that all the time.”

“Punishment to severe to fit the crime !!! Chicago Bears fan,” another wrote.