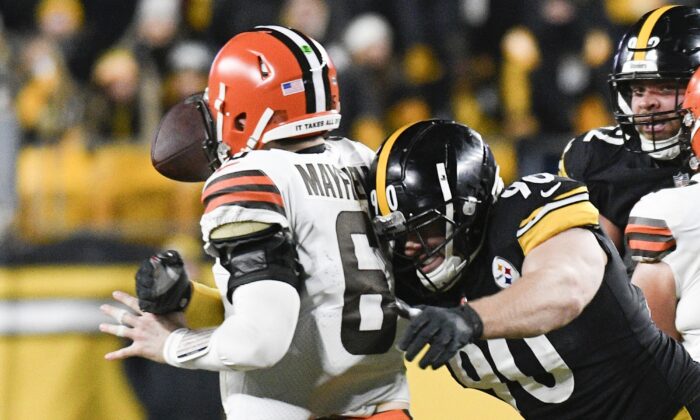 PITTSBURGH—The Cleveland Browns knew they had been eliminated from playoff contention entering a Monday night showdown against their AFC North rival Pittsburgh Steelers.

But a battered Baker Mayfield wanted to lead his team to a winning record.

Now, that it’s not possible, following a 26–14 defeat against the Pittsburgh Steelers, Mayfield may be ready for a rest.

“There was an opportunity to win, and I’m an extremely competitive guy,” Mayfield said. “Now, it’s time for me to look at what’s in the best interest of me and my health. I haven’t been healthy and I tried to fight for my guys. Right now, I’m pretty damned beat up to be honest with you. I gave it everything I had tonight.”

Mayfield was sacked nine times by the Steeler defense. That included four from T.J. Watt, who has a league-high 21 sacks, one short of the NFL record set by Hall of Famer Michael Strahan in 2001.

The Browns’ embattled quarterback completed just 16 of 38 passes for 185 yards one week after throwing four interceptions during a two-point loss at Green Bay. Despite another rough outing, the Browns (7–9) still trailed by five points, 19–14, with 1:10 to play following a 1-yard touchdown pass to Harrison Bryant.

But an onside kick recovered by Pittsburgh’s Minkah Fitzpatrick and a Najee Harris 37-yard touchdown run in the final minute put the game out of reach and sent Cleveland to a third consecutive defeat. The Browns, who have lost four of their last five, missed the playoffs for the 18th time in the last 19 years.

“It’s not going to always be pretty or smooth,” Mayfield said. “But I’m a fighter. If anyone questions how much I want it, turn on this tape. That’s who I am, and that’s who I’ve always been.”

The Browns’ polarizing quarterback has dealt with a shoulder injury since Week 2. Mayfield said he will undergo surgery on a torn labrum in his left shoulder. He will sit out the season finale against Cincinnati next week.

Mayfield shouldered most of the offensive load in the first half, as the Browns ran the ball nine times despite owning the No. 3-ranked rushing attack in the league. Mayfield completed just four first-half passes, which included a stretch of 10 consecutive incompletions at one point. He also missed an open receiver and instead threw a second-quarter interception to Ahkello Witherspoon, a costly turnover, which led to a Pittsburgh field goal.

Nick Chubb, who has 1,201 yards and eight touchdowns despite missing three games, only had four carries for 35 yards in the first half. Stefanski said Chubb battled a rib injury early in the game.

“He was able to play through it, but he needed some rest,” Stefanski said.

Kareem Hunt missed his third straight game with an ankle injury and D’Ernest Johnson was a non-factor with just 13 yards. Chubb finished with 12 carries for 58 yards, as the Steelers, which have the worst rush defense in the league, neutralized the Browns’ ground game for the second straight meeting. Chubb, who had 61 yards in the first meeting with Pittsburgh, was coming off a 126-yard effort against Green Bay.

Cleveland rushed for 219 yards last week against the Packers, despite Mayfield’s four interceptions. The Steelers entered allowing an average of 175 yards on the ground in their previous eight games, including 198 yards rushing or more four times during that span, yet the Browns couldn’t manage a touchdown until the final minute of the third quarter.

“We felt like we had some opportunities,” Stefanski said. “Then, we kind of got behind down and distance a few times. We just could not sustain drives and stay on the field.”